Students can go through AP State Board 10th Class Biology Notes Chapter 8 Heredity to understand and remember the concept easily.

→ Variations arising during the process of reproduction can be inherited.

→ Variations may lead to increased survival of the individuals.

→ Gregor Johann Mendel known as the father of genetics started working on the problem of how variations were passed from one generation to another.

→ Cross-pollinating a pure breed of yellow and green gave all pea seeds in the F1 generation were yellow.

→ On self-pollination plants of Ft generation, they gave about 75% yellow seeds and 25% green seeds in the F2 generation.

→ And the set of green peas gave only green seed giving pea plants.

→ Every pea plant has two factors that are responsible for producing a particular property or trait called “allele”.

→ During sexual reproduction, one factor from each parent is taken to form a new pair in the offspring.

→ Crossing yellow and green seeds produced all yellow seeds because yellow is the dominant factor.

→ The factors which are responsible for the character or trait of an organism, are now named genes.

→ Law of dominance states that among a pair of alleles for a character only one expresses itself in the first generation, as one of the alleles is dominant over the other.

→ The Law of segregation states that every individual possesses a pair of alleles for any particular trait and that each parent passes a randomly selected copy (allele) of only one of these to its offspring.

→ Traits that may be passed from one generation to the next are called heritable traits.

→ Sexual reproduction and errors in DNA copying lead to variations in offspring in a population.

→ Change in the frequency of genes in small populations is known as genetic drift.

→ Jean-Baptist Lamarck was the first person to propose the theory of evolution. He proposed the inheritance of acquired characters.

→ Characters that are developed during the lifetime of an organism are called acquired characters.

→ August Weismann proved that bodily changes are not inherited.

→ Transmission or passing of characters or traits from parent to offspring is called Heredity.

→ The process in which traits are passed from one generation to another generation is called Inheritance.

→ Gene is a segment of a nucleic acid called DNA which is present in the nucleus of every cell.

→ The detailed structure of DNA was discovered by Francis Crick and James Waston.

→ Gametes produced by women will be with only ‘X’ chromosomes.

→ Gametes produced by man will be of two types one with X chromosomes and the other with Y chromosomes.

→ If the sperm carries the Y chromosome and fertilizes the ovum with the X chromosome, the resultant baby will have XY condition. So the baby will be a boy.

→ According to the theory of Natural selection, nature only selects or decides which organism should survive or perish in nature.

→ In the struggle for existence, only the fittest can survive.

→ Darwin published his famous book The origin of species’ in 1859.

→ The small changes within the species are called Micro Evolution.

→ The changes beyond the species are called Macro Evolution.

→ The organs which perform different functions but have similar structures and origins are called homologous organs, eg.: Forelimb of whale, a wing of bat. leg of cheetah, the claw of a mole and the hand of man.

→ The organs which are similar in appearance and function, but have different structures and origins are called analogous organs, eg.: Wings of butterflies, bats and birds.

→ Embryology is the study of the development of an organism from egg to the adult stage.

→ The developmental stages of different animals reveal that they are evolved from common ancestors.

→ The study of fossils is called palaeontology.

→ Archeopteryx is recognised as connecting link between Aves and reptiles.

→ Human evolution is the evolutionary process leading up to the appearance of a modern human being.

→ There are nearly 180 vestigial organs are present in human beings.

→ Variations: Differences in characters within closely related groups of organisms are referred to as variations. They result in organisms belonging to a species being different from each other.

→ Offsprings: The organism or organisms resulting from sexual or asexual reproduction. The product of the reproductive processes of an animal or plant.

→ Traits: A distinguishing characteristic or quality, typically one belonging to a person or animal.

→ Phenotype: It is the composite of an organism’s observable characteristics or traits such as its morphology, development, etc.

→ Genotype: It Is the genetic makeup of an individual usually with reference to a specific characteristic tinder consideration.

→ Heterozygous: It refers to have two different alleles for a single trait.

→ Homozygous: Homozygous refers to have two identical alleles for a single trait.

→ Independent assortment: It states that allele pairs separate independently during the formation of gametes.

→ Allele: It is an alternative form of a gene that is located at a specific position on a specific chromosome.

→ Heredity: The process of acquiring characters or traits from parents to offspring.

→ Autosomes: An autosome is any chromosome that is not a sex-determining chromosome. In humans, there are 22 Pairs of autosomes.

→ Natural selection: Darwin’s most famous theory. A process resulting in the survival of those individuals from a population of animals or plants that are best adapted to the prevailing environmental conditions.

→ Analogous organs: Organs that have similar appearance and functions but have different structures and origins. eg.: Wings of butterfly, of a bat and of a bird.

→ Embryological: Evidence available from the embryonic development of evidence organism for organic evolution.

→ Human evolution: It Is the evolutionary process leading to the appearance of anatomically modern humans.

→ F1 Generation: FIrst filial or progeny of first-generation. The first generation was produced by a cross and consisting of hybrid organisms.

→ F2 Generation: The generation produced by interbreeding individuals of an F1 generation.

→ Gene: A gene is the basic physical and functional unit of heredity. Gene is a working subunit of DNA.

→ Dominant gene: Gene that produces the same phenotype in the organism whether or not its allele is identical.

→ Recessive gene: Gene that produces its characteristic phenotype only when its allele is identical.

→ Inheritance: The process in which traits are passed from one generation to another generation.

→ Evolution: Evolution is a change in heritable traits of biological populations over successive generations.

→ Genetic drift: It is the change ¡n the frequency of genes in a small population.

→ Microevolution: Evolutionary change within a species or small group of organisms, especially over a short period.

→ Homologous organs: The organs which perform different functions but have similar structures and origins. eg.: Wing of the bat, the flipper of a seal, front leg of a horse, an arm of a man, etc.

→ Subtle: So delicate or precise as to be difficult to analyse or describe.

→ Ancestors: Ancestors ¡s any person from whom one is descended.

→ FossIl: These are evidence of ancient life forms which have been preserved by natural processes. 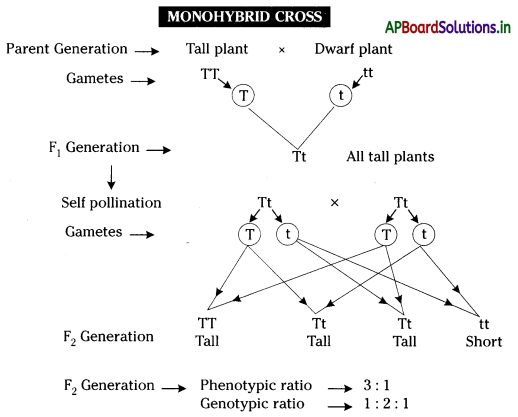 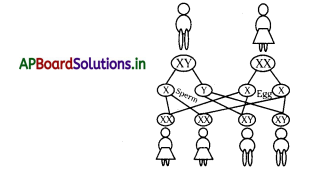 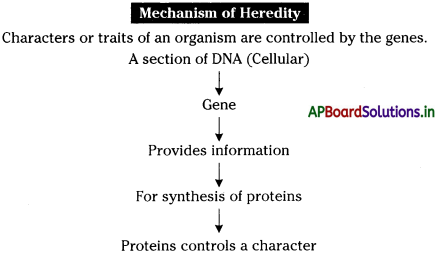 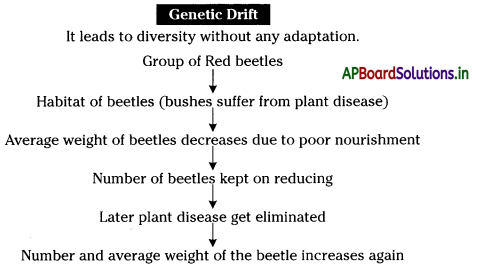 → Genetic footprints of Humans hundreds/thousands of years ago Earliest members are in Africa: