Question 4.
How did the Rashtrakutas become powerful?
Answer:
The Rasthtrakuta kings used the resources to finance the king’s establishment, as well as for the construction of temples and forts. They were also used to fight wars, which were in turn expected to lead to the acquisition of wealth in the form of plunder and access to land as well as trade routes. Close relatives of the king held higher positions. They often shared power with their ‘Samanthas’ as well as with associations of peasants, traders and brahmins. Thus they became powerful.

Question 7.
What were the activities associated with Chola temples? (OR)
Explain the importance of temples during the period of Cholas.
Answer:
Chola temples often became the nuclei of settlements that grew around them. These were centres of craft production. Temples were also endowed with land by rulers as well as by others. The produce of this land went into maintaining all the specialists who worked at the temple and very often lived near it – priests, garland makers, cooks, sweepers, musicians, dancers, etc. In other words, temples were not only places of worship; they were the hub of economic, social and cultural life as well.

Question 9.
Collect the pictures of ancient temples and make an album.
Answer:

Question 10.
Read the first two paragraphs under the title ‘Agriculture and Irrigation’ from pages 104 and 105 and comment on them.
Answer:

Many of the achievements of the Cholas were made possible through new developments in agriculture. Look at Map 2 again. Notice that the river Kaveri branches off into several small streams before emptying into the Bay of Bengal. These streams overflow frequently, depositing fertile soil on their banks. Water from the streams also provides the necessary moisture for agriculture, particularly the cultivation of rice.
Although agriculture had developed earlier in other parts of Tamil Nadu, it was only from the fifth or sixth century that this area was opened up for large-scale cultivation. Forests had to be cleared in some regions; the land had to be levelled in other areas. In the delta, region embankments had to be built to prevent flooding and canals had to be constructed to carry water to the fields. In many areas, two crops were grown in a year.
Answer:
There was a tremendous agrarian expansion during the rule of the imperial Chola Dynasty all over Tamilnadu and particularly in Kaveri Basin.
They built many tanks to irrigate the agricultural lands. The main crop was Paddy. Large scale cultivation was started in 5/6th centuries AD.
Forests were cleared to increase the land for cultivation.
Necessary preventive steps were taken to control floods. Two crops were grown in many areas.

Question 1.
Look at Map and find out whether there were any kingdoms in Andhra Pradesh. 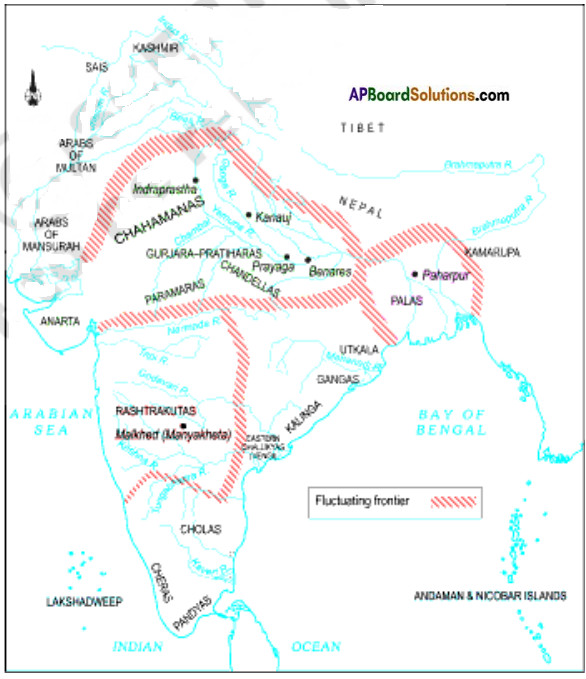 Question 3.
Find out more about taxes that are collected at present. Are these in cash, kind or labour services?
Answer:
The taxes collected m nowadays are in cash only. They are income tax, sales tax, service tax etc.