Question 2.
How could the European armies defeat the Indian armies in the 1700s and 1800s?
Answer:

Question 3.
Collect the information of the 1857 revolt and fill in the table with the particulars.

Question 4.
In 1857, which soldiers felt their religious faith was being violated, and why?
Answer:
Almost people of all the sections of society revolted against the English, in 1857.

Question 5.
In what ways did people revolt against the British in 1857?
Answer:
A wave of people began attacking the bungalows of the English. Offices of the English were set on fire. Many English people were killed. The flames of revolt spread from Kasba to Kasba and village to village in Uttar Pradesh and Bihar. The peasants and Zamindars took up arms together and had the English and their officers on the run. They stopped paying taxes to the British government. They tore up railway lines, burnt down police stations, courts, post and telegraph offices, and uprooted the telegraph wires. The rebels looted the houses and burnt the documents of many money lenders. Thus the rebels fought bravely.

Question 6.
What did the people who revolted in 1857 want to achieve?
Answer:
By May 11, 1857, the Sipahis of Meerut reached Delhi. They entered the Lai Quila and declared the imprisoned Mughal emperor Bahadur Shah Zafar their Badshah. They persuaded him to reject the sovereignty of the British. The rebels wanted to drive out the English and brought back Mughal rule. The rebels made it a clarion call. Armies of the rebel Sipahis and rulers from different corners of the country marched towards Delhi. They hoped that the English would be driven away and Mughal rule and the earlier political order would be restored.

Question 7.
What complaints of the rebels did Queen Victoria try to address in her 1858 declaration. Try to address?
Answer:
In the declaration of 1858, Queen Victoria tried to address the complaints of the native kings who were dethroned and anointed successors. Addressing them the Queen declared that Indian kings should rule their own kingdoms without anxiety because the English would not try to dethrone them. Zamindars, who were treated brutally for the collection of revenue, were given many concessions and were assured that their property would be protected. The Queen addressed the pundits and Maulvis who feared that the British government was interfering in matters relating to Indian religions the Queen assured that the British government would not interfere in their religious matters and the old traditions would be allowed to continue. The queen ad¬dressed the Indian people, who were treated as inferiors and were not taken into their service, were promised that they would be taken into British government service.

Question 8.
What are the similarities and differences between the ways the Mughals and the English came to power in India?
Answer:
Both were the foreigners to establish their power in India. The Mughals came from Magnolia, captured Delhi, and established their rule in India. But the English came to India as a trading company, got permission from Jahangir to construct an English factory at Surat, drove away all the European countries from the competition, accumu¬lated wealth, maintained an army, built forts, fought battles, and used military force and cooked policies to establish their political power in India. Though the Mughals were foreigners, they never treated Indians as slaves; after establishing their kingdom they consider India as their own country. But the English considered Indians as slaves and India as their colony. Unlike the Mughals, the English plundered all drained all the wealth from India.

Question 9.
Locate the sea route of Vasco da Gama from Portugal to India on the map.
Answer: 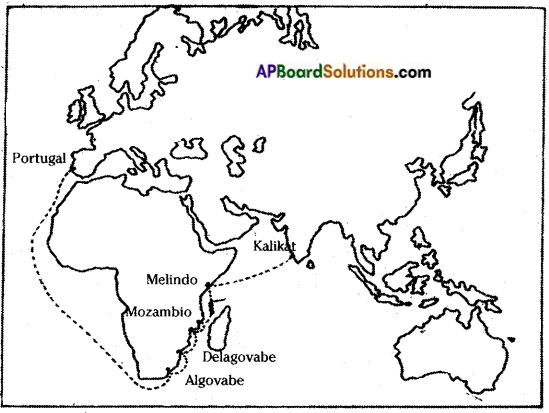 Question 10.
Write a short note on the need for unity to avert foreign invasion.
Answer:
There is one saying that ‘unity is strength’. If all the people of a nation are united they can avert foreign invasion. Otherwise, we have to lose our country.
Ex: During Alexander’s invasion if Porus and Ambi were united, he would not enter our country But ‘Ambi’ made an alliance with Alexander. So he defeated ‘Por us’ and oc¬cupied some parts of our country.

Question 11.
Express your dissatisfaction towards the rule of Britishers.
(OR)
Describe the reasons for the dissatisfaction among Indians against British rule?
The Britishers ruled the country for their welfare. They treated Indians as slaves. They tried to propagate their religion with force. They had stolen our natural resources. They made us ignore our languages like Sanskrit etc. They changed our lives in all aspects.
Perform monoactions of Indian freedom fighters in your school functions.
Answer:
Students Activity