→ From all sources of water reaching the earth less than 1 % of water is useful to man.

→ The cyclic process in which water undergoing a cycle from oceans to land and land to oceans is called the hydrological cycle.

→ There are six stages of the water cycle. They are

→ Continents and oceans are the first-order relief features of the earth.

→ There are five oceans on the earth. They are

→ Millions of years ago oceans were combined together. The single super ocean was known as Panthalassa.

→ Continental shelf, Continental slope, Deep sea plain, and Oceanic deeps or Trenches are the reliefs of the ocean.

→ Most of the deepest trenches are located close to the continents.

→ A line joining points on the sea bed at an equal vertical distance beneath the surface is called ‘Isobath’or ‘Depth contour’.

→ Over millions of years rain, rivers and streams have washed over rocks containing the compound Sodium Chloride (NaCl) and carried them into the sea.

→ The total content of dissolved salts in seawater is called salinity.

→ Salinity is usually expressed as parts per thousand or ppt.

→ A line joining the points in the ocean that has the same degree of salinity is called ‘Isohaline’.

→ The ocean temperature is influenced by latitudes, winds and ocean currents, unequal distribution of land, and change of seasons.

→ As one goes deep inside the oceans, the temperature rapidly decreases for every 1 km and remains stable at the foot of the ocean.

→ Centrifugal force, effects of winds, the effect of precipitation, and the effect of solar energy are the causes for the ocean currents.

→ Stream: The ocean current that flows speedily is called a stream.

→ Drift: The ocean current that flows slowly is called a drift.

→ Ocean current: The general movement of a mass of water in a fairly defined direction over a great distance.

→ Transpiration: A considerable proportion of water vapor is released into the atmosphere by plants, through a process called ‘Transpiration’.

→ Salinity: The total content of dissolved salts in seawater is called salinity.

→ Elnino; Lanino: These are the effects caused by the changes in temperature in the Pacific Ocean.

→ Evaporation: The process by which water changes from a liquid to a gas is called evaporation.

→ Precipitation: Transporting water from the atmosphere in the form of rain, sleet or snow, is called precipitation.

→ Sea: A sea is a body of saline water partly or fully enclosed by land.

→ Deep-sea plain: Gently sloping areas of the ocean basins whose depths vary between 3000 m to 6000 m are called deep-sea plains.

→ Oceanic Deeps (or) Trenches: The large narrow trenches that plunge as great ocean deeps to a depth of 6000 m are called oceanic depths or trenches.

→ Isoline: A-line joining the points in the ocean having the same degree of salinity is called Isohaline. 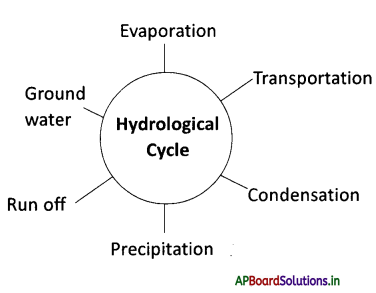 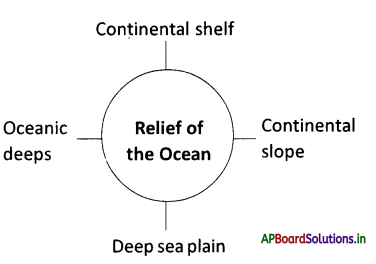 → Millions of years ago, oceans were combined together. The single super ocean was known as ‘Panthalsa’.

→ Isobaths: A-line joining points on the sea bed at an equal vertical distance beneath the surface. Sometimes referred to as depth contours.
→ River water contains 2% of sodium chloride.