Question 1.
Who are the Popular deities and when and by whom are they worshipped?
Answer:
Pochamma, Maisamma, Ganganamma, Yellamma, and Paidithalli are folk goddesses. Potharaju Beerappa and Katamaraju are folk gods.
Folk gods and goddesses belong to particular castes or even particular villages or even particular families. Many of the folk gods and goddesses were actually local heroes who either died fighting for the defense of their people or were themselves wronged by the powerful people of their times. Common people believed that such persons attained special powers to help people or cause problems if not worshipped. So people worship these folk gods and goddesses for good crops, for keeping away infectious diseases and evils from their families, for guarding the boundaries of the villages, and will not allow any disease or evil or enter the village.

Question 2.
How did Sammakka and Sarakka become folk goddesses?
Answer:
Medaraju was a tribal chief who was under the Kakatiya kings. His wife was Sammakka and their daughter was Sarakka and their son was Jampanna. He had a son-in-law named Pagididda Raju. Once due to drought, he could not pay the tribute to the Kakatiya king who sent his army against Medaraju. Medaraju’s entire family led the men and women of the tribe in the fierce battle. All of them got killed in the battle Jampana also fought bravely till his last breath and died in ‘Sampenga Vaagu’ to prevent the Kakatiya army from crossing the stream. Hence it is known as Jampanna vaagu. Sammakka and Sarakka fought against the army and sacrificed their lives for the sake of their tribe. From then onwards the tribal people of the entire region venerated them for their courage and sacrifice and to this, they celebrate the Medaram Jatara in their honour.

Question 6.
Which saints, pirs and Babas have you seen your family pay their respects to?
Answer:
In our area, people worship saints such as Brahmam guru, Yogi Vemana, the saints of Vaishnava- the Alvars are worshipped. In our area – Babas such as Shirdi Sai Baba, Puttaparthi Satya Sai Baba are worshipped.
In our area, people go to different dargahs. People visit and pay respects to Baba Mastanvali Dargah at Guntur; Baji baba at Peda Kakani and Kaleshavali Dargah at Kasmuru of Nellore district.

Question 8.
Do you know how people worship?
Answer:
In the villages on special occasions, people of all castes go to the shrine with bonalu. They wash the deity and clean the shrine area. People pray to god/goddess in their own language according to their customs and traditions. They offer a part of the bonam and sometimes also offer a chicken or sheep.

Question 9.
How are the deities worshipped and who does they worship?
Answer:
People who are facing problems, who have been falling ill repeatedly worship the goddesses. They would offer her special worship to appease her. They offer bonalu and sacrifice a cock to the goddess.

Question 10.
In which languages are the deities addressed by the worshippers?
Answer:
The worshippers use their own language to address the deities. Like in the temples of main deities they don’t use any Sanskrit mantras and chantings.

Question 11.
Read the following passage:
Maisamma: She is believed to protect the cattle. Among the cattle sheds, a niche is whitewashed and decorated with “Kumkuma ” and called ‘Maisamma Goodu ’. In many places, Katta-Maisamma is also worshipped as a goddess of water and is worshipped in the form of a small stone on the tank bund. People believe that she will ensure that the tank is full. Thus, due to her blessings the crops flourish.
Now answer the following questions :
a. Which deity is talked about in the above passage?
Answer:
Maisamma.

Question 12.
Read the following passage:
Yellamma: Yellamma is also called Polimeramma, ‘Mariaemma ’ ‘Renuka ’Mahankali,
Jogamma, Somalamma and other names. It is believed that she guards the boundaries of the village and will not allow any disease or evil to enter the village. People mainly pray to her to prevent epidemics like cholera.
Now answer the following questions:
a. Which deity is being talked about in the above passage?
Answer:
Yellamma.

c. Who guards the boundaries of the village?
Answer:
Yellamma.

d. What do the people mainly worship Yellamma for?
Answer:
People mainly pray for Yellamma to prevent epidemics like cholera.

Question 13.
Read the following passage:
Many of the folk gods and goddesses were actually local heroes who either died fighting for the defence of their people or were themselves wronged by the powerful people of their times. Common people believed that such persons attained special powers to help people or cause problems if not worshipped. Two such folk heroes who laid down their lives in defence of the tribal people were Sarakka and Sammakka in whose honour a Jatara is
conducted.
Now answer the following questions :

c. Name the goddesses who laid down their lives in defence of the tribal people.
Answer:
Sarakka and Sammakka.

d. On whose honour a Jatara is celebrated?
Answer:
Sammakka and Sarakka.

e. What would happen if folk deities were not worshipped according to the common belief?
Answer:
They would cause problems.

Question 14.
Read the following passage :
It is a celebration by the tribal people of Taadwai mandal in Warangal District at Medaram village. People from Andhra Pradesh, Telangana, Maharashtra, Madhya Pradesh, Odisha, Chattisgarh and Jharkhand assemble to celebrate the jatara. Nearly one crore people attend it.
Now answer the following questions:

a. Which celebration is being talked about in the above passage?
Answer:
Medaram jatara.

b. Where is the jatara celebrated?
Answer:
At Medaram, in Taadwai Mandal of Warangal district.

Now answer the following questions.
a. Describe how medaram Jatara is celebrated.
Answer:
It’s a celebration by the tribal people of Taadwai mandal in Warangal district at Medaram village.
The Medaram Jatara is organised every two years. This is a three day fair. Sammakka and Sarakka are the formless goddesses. Caskets representing them are brought from the forests in an elaborate procession, gaily decorated and placed on the platform under a tree. At that time devotees feel the spirits or goddess has taken possession of them. The people offer Bangaram, Jaggery to the goddess.

b. Describe how Urs is celebrated.
Answer:
Ameenpeer Dargah in Y.S.R Kadapa district, Khajapeerullah Hussaini tomb was founded around 400 years ago. In memory of his great-grandson, Syed Shah Arifullah Hussainy Urs is celebrated for seven days in which both Hindus and Muslims participate. Offerings of sandalwood paste (Gandhapu Chandanam) on the first day, ‘Chadar’ offer on the second day and ‘Mushaira’ on the third day take place in this seven day Urs in a grand manner. Qawwali programme is held on both nights.

Question 17.
Locate the following places in the map given below: 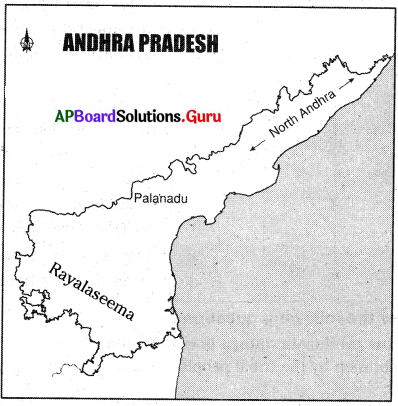 Question 18.
Animals buffaloes, in many cases, are usually sacrificed for the village deities. What are the possible consequences of the ban on animal slaughter?
Answer:
As a law of nature, we can kill those animals which we eat. For other purposes, for entertainment, hunting and for sacrifices we should not kill animals. It is a crime. If the ban on animal slaughter is strictly executed, it is better for society. In fact, laws and Acts stay on paper, still, these practices will continue. Because the governments are apathetic to interfere with religious practices. But with the awareness campaigns by the intellectuals and N.G.Os and with the teachings of Mahatma Gandhi and Ambedkar the buffalo sacrifice is on the decline.

Question 19.
Gel detailed information from your grandparents about any Jatara in your area. Prepare a report.
Answer:
Student Activity.

Question 20.
Collect stories and songs about any of the folk deities of your area and prepare a small booklet about it.
Answer:
Student Activity

Question 21.
Write about a Jatara or Urs celebrated by the people together in your area.
Answer:
I went to Venkatagiri in the Nellore district to visit Poleramma Jatara.
It is celebrated with great pomp and show. Thousands of devotees from far and near made a beeline to the handloom town to witness the centenary year celebrations organised by the Endowments department in veneration of the goddess in keeping with the tradition.
People offering prayers to the beautifully decorated idol of the goddess. This Jatara is celebrated for two days. All people participated and worship goddess Poleramma in a devotional manner.