Question 1.
Fishing with the mechanical boat is risky than the Karratheppa. Why?
Answer:
Compared to the Karrateppa, there is far more risk of life in Marapadava (Mechanised boat) because it goes far into the sea and it is difficult to swim over to shore in times of trouble.
What is worse, there is no first aid in the big boats, nor any life jacket. Fishing is a risky and brave occupation.

Question 2.
Study the table given below and answer the following questions.
Distribution of Fresh Water on Earth

a) Where do we have the highest percentage of fresh water on the Earth?
Answer:
Ice caps and Glaciers.

b) Give any two sources of surface water.
Answer:
Lakes, swamps, rivers, etc.

Question 3.
Read the info chart given below and answer questions a and b. 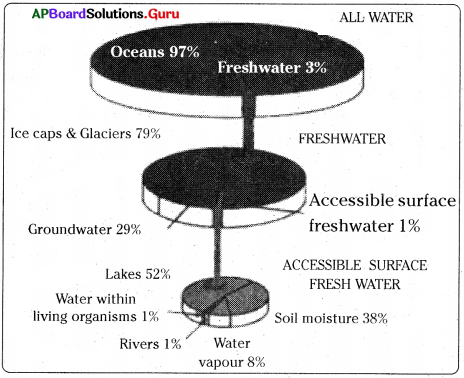 Question 4.
“The lives of fishermen are risky and troublesome” – Comment in your own words.
Answer:
I agree with the above statement.

Their life is risky and troublesome. While they go fishing, if any cyclone hits that area, they are not able to reach the coast of the ocean.

Question 5.
What is an ocean? Name the oceans in the world.
Answer:
The vast body of salt water that covers a considerable portion of the earth’s crust is called the ocean. There are three major oceans in the world. They are the Pacific, the Atlantic, and the Indian ocean. Apart from these three, waters of the Arctic and Antarctic are also described as oceans.

Question 6.
What are the two types of ocean currents? Give examples.
Answer:
Ocean currents are of two types. They are:
1) Warm currents: They flow from the equator towards poleward regions.
Eg: The Gulf stream and the Atlantic drift.
2) Cold currents: They flow from poleward regions towards the equator.
Eg: The Labrador current, The Greenland current.

Question 8.
Explain the different types of nets.
Answer:
Nets are of different types based on different sizes of the Kannulu (Rings) and the layers of the net. Recently a net known as Ring Net which helps in getting a better catch is being increasingly used by the fishermen. This has helped to reduce migration from the village. Earlier there were nets made up of cotton thread. Now cotton nets have almost been replaced by plastic, nylon and other synthetic, materials. A net lasts for 4 – 5 years. Nets are purchased by weight and the type of rings they contain. Nets cost around Rs. 250-300 per kg. Ring nets weigh around 500 kgs.

Question 10.
Is the water found in your village/town saline or potable? Is it different in different parts of the village/town?
Answer:
In our city, Vijayawada both saline and potable waters are found. The water supplied by Corporation is potable water. In many areas, people use bore pumps for domestic purposes. Of these, some are saline and some are potable.

Question 14.
Look at the image of Bhavanapadu village and find the following. 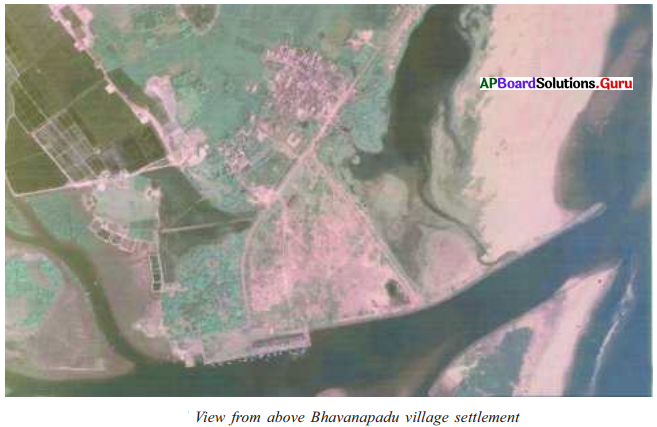 i) Identify the water bodies in the image.
ii) Identify the land that is used for activities other than agriculture in this village.
If so, for what purpose?
Answer: 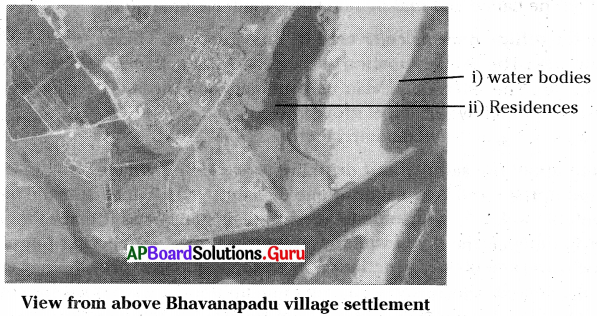 Question 15.
Read the following para and answer the questions.
Tata Rao owns this boat which he purchased from Markonda in Odisha. It cost him around Rs. 6 lakhs. He borrowed the money from private moneylenders at a high rate of interest. He couldn’t get a bank loan, as he had no fixed assets. Even for daily fishing expenses, he has to get advances from middlemen. He has to invest a minimum of Rupees. 5,000/- per trip for diesel, wages, and other things. Because he has borrowed money from the middleman, Tata Rao has to sell the day’s catch of fish to the middleman at the rate he fixes. By this time the boat is ready for sale and all the twenty members are on the boat. They go up to 15-20 kilometers in the sea.
a. Where did Tata Rao purchase the boat?
Answer:
Tata Rao purchased the boat from Markonda in Odisha.

b. Why could he not get a bank loan?
Answer:
Because he had no fixed assets.

c. Where did he get advance?
Answer:
From Middlemen.

d. How much money did he invest?
Answer:
He invested Rs. 6 lakhs and a minimum of Rs. 5000/- per trip for diesel, wages, and other things.

e. Did he have any other option to sell his day’s catch-offish to anyone at a high rate?
Answer:
No. He had no option but to sell the day’s catch of fish to the middleman.

Question 16.
For what purpose are thermocol boxes shown in the photo lined up in the middleman’s add? 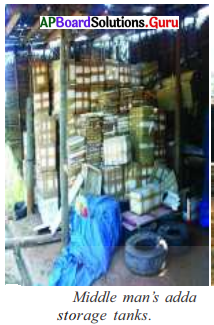 Answer:
Some middlemen temporarily store the fish, segregate them and carry them in cold container tanks faraway places like Kolkata, Bangalore, Chennai, Hyderabad, Kerala, and so on.
Their people store the fish in pheromonal boxes so that they won’t get damaged and middlemen store them for many days.

Question 17.
Write the different crops cultivated in Bhavanapadu village.
Answer:
Fishing is not the only occupation of the people in Bhavanapdu village. They cultivate the land to grow crops and also rear animals and birds. The village soil is mainly loamy and rice is the principal crop grown on it.
They don’t grow any commercial crops.

Question 18.
Explain about the salinity and drinking water in the village.
Answer:
The water in the village is saline. If one digs up to 8 or 10 feet near the beach one can get potable water. But in summer these wells dry up. And it takes a long time for the water to fill up again. If you wait for an hour you may get another pot of water.
The government has sanctioned a protective water project that pumps water from the nearest village known as Suryamanipuram. It gave relief for some time. But cleaning of headwater tank and frequent repair of pumping motor is a hurdle.

Question 19.
In the world map or on the globe, find the names of five seas and five oceans.
Answer: 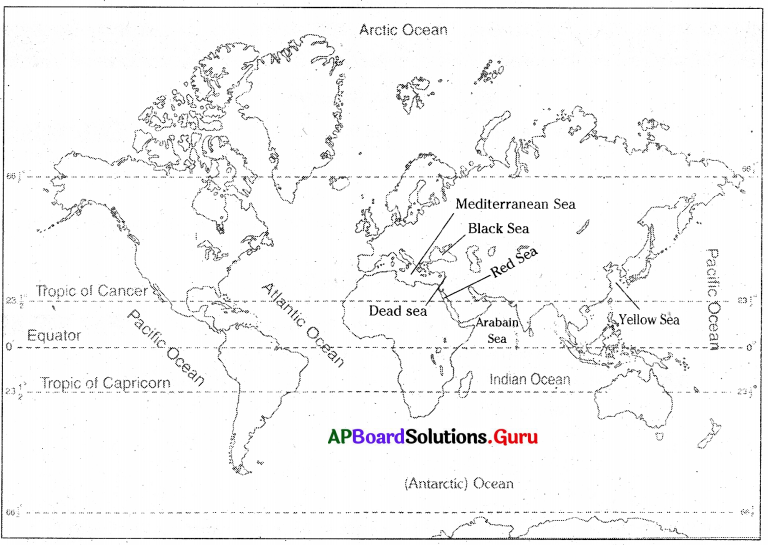 Question 20.
How are oceans useful to mankind?
Answer:

Question 21.
Describe the social life of the people of Bhavanapadu.
Answer:
A large number of people of Bhavanapadu worship Gangamma, Gowri, and Shiva primarily. They perform puja to their boats and nets. The most important festival is Gowri Purnima. They spend the common good fund of the village on these festivals. Most of the men wear tattoos. There is an open stage, where the dramas, Burra Katha, Hari Katha, and record dances are performed. All these activities are led by the caste headmen called Pillas. They determine the customs and traditions of the people. They even resolve disputes and impose fines. The money collected goes to the common good fund.