Students can go through AP State Board 10th Class Biology Notes Chapter 6 Reproduction to understand and remember the concept easily.

→ Reproduction is necessary for the perpetuation and continuation of life.

→ Reproduction is of mainly two types – sexual and asexual reproduction.

→ Asexual reproduction involves a single parent without the fusion of gametes.

→ The fusion of gametes takes place in sexual reproduction.

→ In sexual reproduction, only half of each parent’s chromosomes are passed to the next generation.

→ Vegetative propagation is of two types – natural and artificial propagation.

→ Artificial vegetative propagation is done through cutting, layering and grafting. Through grafting, we can acquire desirable characters of plants.

→ Tissue culture is a modern technique of growing plants in which more plants can be produced in a short time.

→ Sexual reproduction involves the fusion of male and female gametes. Union of gametes is known as fertilisation.

→ Fertilization takes place either outside the body of the mother or inside the mother’s body.

→ The male reproductive system consists of a pair of the testis, accessory glands and a system of ducts.

→ Accessory glands include one prostrate and two Cowper glands which secrete a fluid called semen.

→ The sperm cell is a flagellated structure with a long tail that helps it to move towards the ovum.

→ In human beings fertilisation occurs in the fallopian tube of the female reproductive system.

→ The placenta is a tissue formed by the cells from the embryo and the mother and it supplies nutrients to the embryo.

→ From the third month of pregnancy, the embryo is called a foetus.

→ Corian and Amnion are the membranes formed by the growing embryo.

→ The umbilical cord connects the embryo with the placenta.

→ The gestation period in human beings is 9 months or 280 days.

→ The reproductive part of the flower that contains sex cells or germ cells is stamens and carpels.

→ Pollen grains are spores produced by pollen mother cells present in the pollen sac of the anther.

→ Pollen grain germinates on stigma and produces a slender thin-walled pollen tube, one of its two nuclei divides and forms two sperms.

→ Union of one sperm with the egg in embryosac is called fertilization.

→ Union of second sperm with fusion nucleus is known as double fertilisation.

→ Continuation of life starts from cells either those of the general body or the sex cells.

→ Walther Flemming in 1879 discovered chromosomes that appear double in nature.

→ Gregor Mendel in 1866 published a paper on heritable elements in peas.

→ August Weiseman hypothesised that in successive generations, individuals of the same species have the same number of chromosomes.

→ The scheme of the mitotic division was confirmed in 1904 by Theodor Boveri.

→ The double helix structure of DNA was discovered by Watson and Crick in 1853.

→ The number of chromosomes in man is 46.

→ Cells divide for the growth of the individual to repair and replace the wear out cells and also for the formation of gametes.

→ Cell division is of two types

→ Somatic cells from the body of the organism whereas germ cells participate in reproduction.

→ Interphase can be divided into three phases. They are the G1 phase, S phase and G2 phase.

→ Prophase, Metaphase, Anaphase and Telophase are the different stages in mitosis.

→ Meiosis has two phases, during the first phase the parent cell divides twice.

→ The second phase of meiosis is similar to normal mitosis.

→ Sexual maturation does not necessarily mean that the body or the mind is ready for sexual acts.

→ Sexual act transmits many diseases like Gonorrhoea, Syphilis and AIDS.

→ Andhra Pradesh has the highest number of HIV patients in the country.

→ Contraception to avoid pregnancy can be achieved by the use of condoms, oral pills, copper-T and surgical methods like Vasectomy and Tubectomy.

→ Teenage motherhood should be avoided.

→ Girls below 18 years of age should not be married.

→ The male and female child sex ratio is declining due to female foeticide.

→ Determination of sex before birth is illegal.

→ As a citizen of India, we should have knowledge of reproductive health not only to control high population growth but also to create a healthy society.

→ Progeny: A genetic descendant or offspring; The young of 1mai and plants.

→ Cyst: A small capsule-like sac that encloses certain organisms in their dormant or larval stage.

→ Fragmentation: Asexual reproductive method in multicellular organisms as in algae. Here the filaments break into parts and each part grows into a new individual.

→ Regeneration: It is the capacity to regenerate the full body from a part of the body of several organisms. eg: Hydra, Planaria.

→ Vegetative propagation: Production of new plants from the vegetative parts such as roots, stems and leaves.

→ Artificial propagation: The process of growing many plants from one plant by man-made methods.

→ Parthenogenesis: It is the process of development of an organism from an unfertilized egg. eg: Drones (Male honey bees).

→ Cutting: A vegetative propagation method in which a piece of stem or root of the source plant is placed in suitable soil to get a new plant.

→ Layering: A vegetative propagation method in which a portion of an aerial stem grows roots while still attached to the parent plant and then detaches as an independent plant.

→ Grafting: lI is a technique of inserting a part of one plant into another plant, that the two will unite and continue their growth.

→ Stock: The portion of the graft which is attached to the soil.

→ Scion: It is the upper part of the union in grafting which has lost its root system.

→ Desirable characters: The features of plants which we like to have in grafting.

→ Tissue culture: Technique used to maintain or grow cells, tissues or organs under sterile conditions on a nutrient culture medium of known composition.

→ Placenta: it is the part that connects the developing foetus to the uterine wall to allow nutrient uptake, waste elimination and gas exchange via the mother’s blood supply.

→ Umbilical cord: It is a tube-like structure formed by the allantois membrane of the embryo. It connects the embryo with the placenta.

→ MitosIs: A cell division that occurs in somatic or vegetative cells forming two daughter cells having the same number of chromosomes as in their parental cell.

→ Meiosis: Cell division which occurs in germ cells or reproductive cells forming four daughter cells (gametes) having half of the number of chromosomes when compared to their parental cell.

→ Endometrium: The glandular mucous membrane lining the internal surface of the uterus in mammals.

→ Chromatid: One copy of a duplicated chromosome is generally joined to the other copy by a centromere, for the process of nuclear division.

→ Chromosome: A thread-like structure of nucleic acid (RNA, DNA) and proteins found in cells, carrying genetic information In the form of genes.

→ Foeticlde: It is the act of causing the death of a foetus by destruction or aborting.

→ Vasctðrny: It Is a surgical procedure (or male sterilization In which a small portion of vas deferens is removed and cut ends are tied.

→ Tubedomy: A surgical procedure for female sterilization In which a small portion of the fallopian tube is removed and the cut ends are tied.

→ Budding: A bud develops as an outgrowth due to repeated cell division at the specific site which after developing into individuals detach from the body of the parent to become new individuals. eg: Hydra.

→ Sporophyll: Leaf that bears sporangia Is called the sporophyte. Eg: Ferns and mosses.

→ Sporangia: A structure within which spores are formed.

→ Scrotum: A pouch of skin containing the testicles.

→ Seminiferous tubules: These are the sites In the testis where spermatozoa mature.

→ Vasa efferently: Any of a number of short ducts that carry sperm from the testis to the epididymis.

→ Epididymis: It Is a long, coiled tube that stores sperms and transports them from the testes.

→ Chorlton: It Is the outer membrane of the growing embryo.

→ Amnion: It is the sac-like structure around the embryo.

→ Anti-Retroviral Therapy (ART): It Is a treatment for AIDS disease. It Includes using multiple antiviral drugs in an attempt to control HIV infection.

→ Contraceptive: Any device or chemical which prevents pregnancy in a woman is called a contraceptive.

→ Epicotyl: It is the embryonic shoot above the cotyledons.

→ Hypocotyl: It is the base stem under the spent withered cotyledons.

→ Colostrum: The first secretion from the mammary glands after giving birth, rich in antibodies. 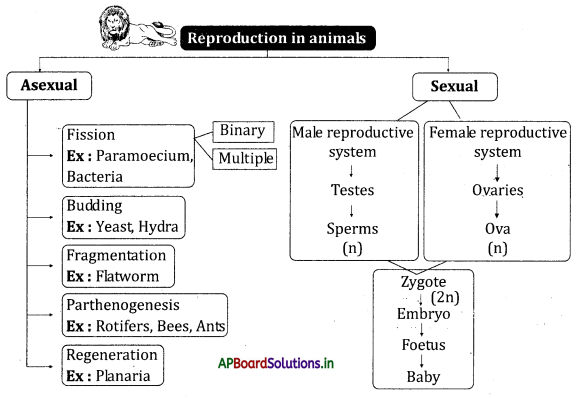 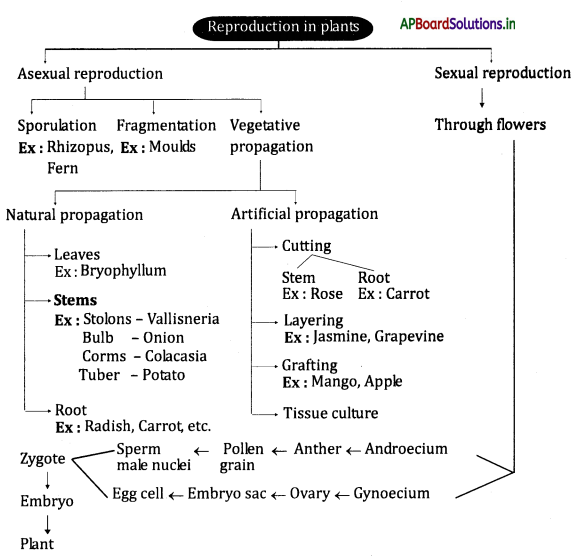 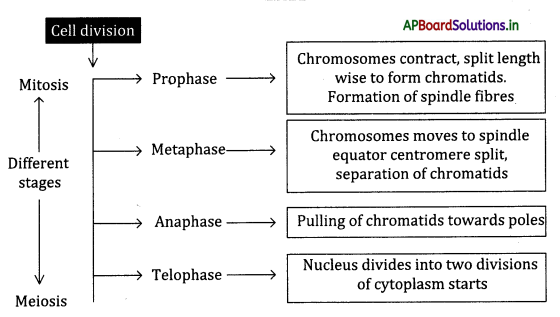 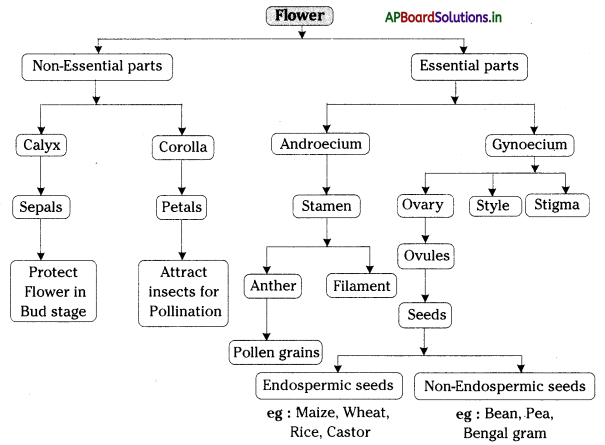