Students can go through AP State Board 9th Class Physical Science Notes Chapter 7 Reflection of Light at Curved Surfaces to understand and remember the concept easily.

→ The concave mirror converges the parallel light beam at one point. So it is called a converging mirror.

→ Convex mirror diverges the parallel light beam. So it is called a diverging mirror.

→ We always get a virtual and diminished image due to a convex mirror.

→ The image distance is negative for a real image and positive for a virtual image.

→ Magnification is positive for erect images and negative for the inverted images.

→ Solar cooker works on the principle of converting sunlight at a point due to concave mirror.

→ We should use sign convention every time while using the formulae of the mirrors.

→ Curved Surface: The surfaces which are not flat are called curved surface

→ Normal: The Pine perpendicular to the surface is called normal.

→ Centre of curvature (C): The normal from a concave mirror converges at a point that point is called the center of curvature.

→ Principal axis (or) Central axis: The horizontal line which passes through the center of curvature and pole.

→ Pole (P) (or) Vertex: The point where the central axis touches the mirror.

→ Focal length (f): The distance between vertex and focus.

→ Virtual image The Image formed in the mirror by extending the rays backward is called a virtual image.

→ Real image: The image formed due to the converging of light rays is a real image.

→ Ray diagram: A diagram showing the paths of selected rays through an optical system.

→ Reflection: The bouncing back of the light is called reflection.

→ Reflected Ray: The ray which is reflected from the surface is called a reflected ray.

→ Concave mirror: A spherical mirror whose reflecting surface is curved inwards is called a concave mirror.

→ Convex mirror: A spherical mirror whose reflecting surface is curved outwards is called a convex mirror. 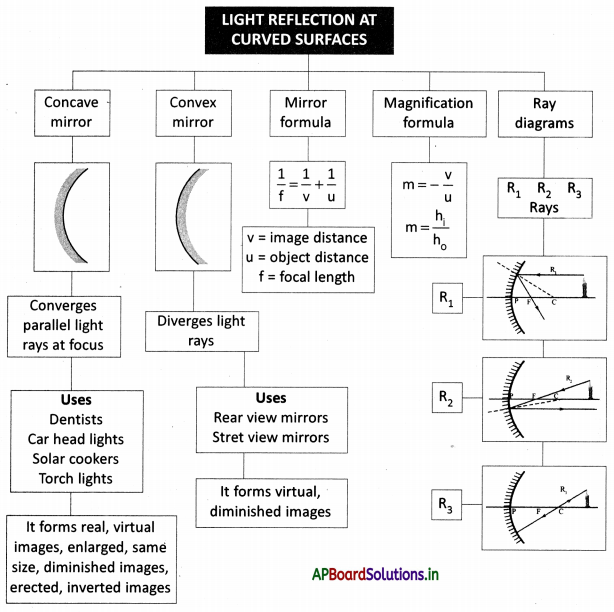