→ Magnetic flux density (B) is defined as the ratio of flux passing through a plane perpendicular to the field and the area of the plane.

→ To find the direction of the magnetic field due to the straight conductor-carrying conductor, we use the right-hand thumb rule.

→ In an electric motor, electrical energy is converted into mechanical energy.

→ Electromagnets are used to lift heavy iron pieces. They are fitted on cranes lifting heavy objects of scrap iron.

→ Faraday’s law: The induced EMF generated in a closed loop is equal to the rate of change of magnetic flux passing through it.

→ Lenz’s law: The induced current set up in the coil is in such a direction that it opposes the changes in the flux.

→ When a conductor of length ‘V moves perpendicular to field B with a speed v then the potential difference (voltage) developed between the ends of the conductor is B/v. This EMF is called motional EMF.

→ The polarity of electromagnets can be reversed by changing the direction of the electric current.

→ In generators, mechanical energy is converted into electrical energy.

→ The polarity of a permanent magnet cannot be reversed.

→ The effect of magnetic field on moving charges has been used to build machines, called particle accelerators. Ex: Cyclotron.

→ The ratio of magnetic force to electric force is very negligible.

→ In domestic circuits, the series arrangement is not used.

→ To protect electric appliances like television sets, computers, which are highly expensive, cartridge fuses are used.

→ A.C can be transmitted to distant places without much loss of electric power than D.C.

→ A.C can be easily connected to D.C.

→ In the process of electrolysis, D.C. is used.

→ If the number of turns, area, speed of the rotation of armature increases induced emf is increased.

→ An electric fuse is made of a material of low melting point.

→ Magnetic flux: The number of lines passing through the plane of area perpendicular to the field is called magnetic flux. It is denoted by ‘Φ’. Its SI unit is Weber.

→ Slip rings: The reverse of current in an AC dynamo occurs because the two ends of the armature coil are in permanent contact with the same two slip rings and S2

→ Induced current. Whenever there ¡s a continuous change of magnetic flux linked with the closed coil, the current is generated in the coil. This is known as induced current.

→ Induced EMF: The pushing or pulling of the magnet causes a change in magnetic flux linked to the coils which cause induced EMF.

→ Electric generator: It is a device that converts mechanical energy into electrical energy.

→ DC and AC currents: An electric current whose magnitude is either constant or variable but the direction of flow in a conductor remains the same is called Direct Current. It is denoted by DC. An electric current whose magnitude changes with the time and direction reverses periodically is called Alternate Current. It is denoted by AC.

→ Magnetic compass: It is a simple device to find directions. It is a small magnet that is pivoted at its center so that it can rotate in its horizontal plane, and always point towards the north-south direction of the earth, after coming to rest.

→ Ampere’s swimming rule: Imagine a swimmer along the length of the conductor in which current flows. Then the left-hand motion of the person gives the direction of deflection of the north pole of the magnetic needle placed near to it.

→ Electromagnet: An electromagnet is a temporary strong magnet and is just a solenoid with its winding on a soft iron core.

→ Permanent magnet: A permanent magnet is made from steel. As steel has more retentivity than iron, it does not lose its magnetism easily.

→ Energy meter or KWH meter: The cable connected to the energy meter records the electricity consumption of the house in kilowatt-hour.

→ Main Fuse: The live wire coming out from the output terminals or KWH meter has another fuse which is called the main fuse.

→ Electric Fuse: It is a device used in series to limit the current in an electric circuit so that it easily melts due to overheating when excessive current passes through it.

→ Armature: Armature is a coil that consists of a large number of turns of insulated copper wire wound over a soft iron core. it revolves around an axle between two poles of a strong magnet. 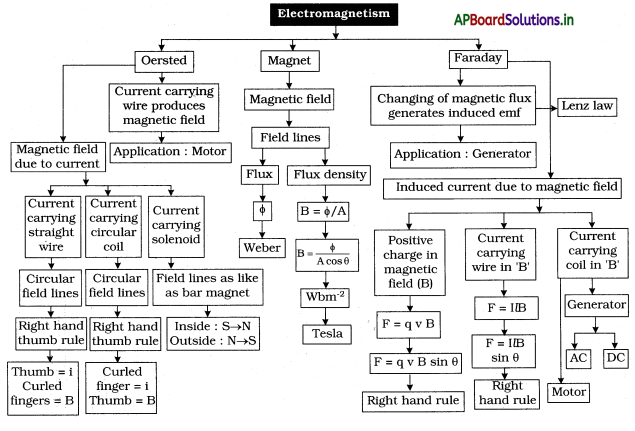 → (Hans Christian Oeited(1777 – 1851):
One of the leading scientists of the f 9th century; played a crucial role In understanding electromagnetism. He gave lectures which were quite popular among the public and also learned a lot during the tours. During one such lecture In April 1820, Oersted carried out an experiment that was never performed before. He placed a Compass needle underneath a wire and then turned on the electric current. The needle of the magnetized compass showed movement.

Oersted recognized the significance of what he had ‚ust done. Earlier, It was believed that electricity and magnetism were two dill event forces. Oersted had demonstrated that they were. Interconnected. Through this observation, he showed that electricity and magnetism Were ie1ated phenomena. Some scientists, Influenced by this experiment, continued With the modern field of “electromagnetism”. Their research resulted In several new scientific theories and various vital Inventions like the dynamo and the electric motor, Crested technologies such as the radio, television, and fiber optics. The unit of magnetic field strength Is named the Oersted In his honor. Oersted was made a foreign Academy of science in 1822.