→ The atmosphere is a sea of gases surrounding the earth.

→ The atmosphere consists of nitrogen (78%), oxygen (21%) and argon, neon, carbon dioxide, methane, ammonia and ozone in a very small percentage.

→ The fine dust particles or particulates can change atmospheric conditions and are beneficial to life on earth.

→ On the basis of chemical composition, the atmosphere is divided into two broad layers. They are 1) Homosphere 2) Heterosphere.

→ The Homosphere consists of three thermal layers as Troposphere, Stratosphere and Mesosphere.

→ When air is hot the pressure becomes low and when it is cool air pressure increases.

→ Because of the impact of Earth’s rotation on its own axis, the winds move slightly to the right in the northern hemisphere and to the left in the southern hemisphere. This effect is called the Coriolis effect

→ Depending upon the wind speed, their features, their directions, the way they occur, winds are classified into three types. They are Planetary winds, Seasonal winds and Local winds.

→ The winds that blow continuously and regularly above the world pressure belts are known as Planetary winds.

→ The winds in low latitudes that seasonally change direction between winter and summer are called Seasonal winds.

→ The winds that blow due to local variation in the temperature and pressure, and influence a very small area are called Local winds.

→ Chinook and Loo are hot and dry local winds.

→ Climate is a description of the average atmospheric conditions for areas over a long period of time.

→ The daily state of the atmosphere at a particular time and place is called weather.

→ Temperature, pressure, wind, humidity and precipitation are called the elements of weather.

→ The amount of water vapour in the atmosphere is called humidity.

→ The relative humidity is the ratio between the maximum water vapour that the air can hold at a given temperature and pressure and the actual amount of water vapour it holds at any given time.

→ If the atmosphere has 100% relative humidity, it is known as saturation level

→ When relative humidity exceeds 100 per cent the excess of water vapour present in the atmosphere gets condensed and forms as minute droplets of water.

→ With condensation, the droplets get heavy and fall to the ground as precipitation in the form of rain, snow, hail etc.

→ On the basis of origin, rainfall may be classified into three main types.
They are:

→ Convectional currents: The transfer of heat by the mass movement of heated particles into an area of cooler fluid.

→ Relative Humidity: The amount of water vapour in the air.

→ Leeward side: The other side of the mountain receives less rainfall.

→ Chinook: The winds that move down the Rockey Mountains in the U.S.A – Canada and part of North America are known as Chinook.

→ Orographic Rainfall: The rain that occurs when the moist wind is forced to rise over mountains or other elevation in its path is called Orogenic rainfall (or) Orographic rainfall.

→ Loo: The hot and dry winds that blow in the plains of northern India from west to east in the months of May and June are called Loos.

→ Atmosphere: The thin layer of air that surrounds the earth is the atmosphere (or) The atmosphere is a sea of gases surrounding the Earth.

→ NASA: National Aeronautics and Space Administration – the space agency of the U.S.A.

→ Particulates: The fine dust particles in the atmosphere are called particulates.

→ Homosphere: The layer of the atmosphere which consists of gases like Nitrogen, Oxygen, Argon and Carbon dioxide.

→ Heterosphere: The layer which has heterogeneous composition and which is above 90 km of the atmosphere is called heterosphere.

→ Wind: The air that moves from areas of higher pressure to areas of lower pressure, is called wind.

→ Breeze: If the air that moves at a slow pace and we feel comfortable in it, is called a breeze.

→ Gust: The wind that comes in a short and fast burst is called a gust.

→ Storm: The wind that comes very fast and blows things around is called a storm.

→ Planetary winds: The winds that blow constantly, continuously, regularly above the world pressure belts are known as planetary winds.

→ Mistral: The most famous cold wind that blows from the Alps over France towards the Mediterranean sea is called Mistral.

→ Climate: The average atmospheric condition for areas over a long period of time is called the atmosphere.

→ Dew point: The critical temperature at which saturation level of humidity is reached is called a dew point.

→ Convectional Rainfall: The rainfall that occurs when moist air over the heated ground becomes warmer than the surrounding air and is forced to rise, expand, cool and yield some of its moisture, is called Convectional rainfall. 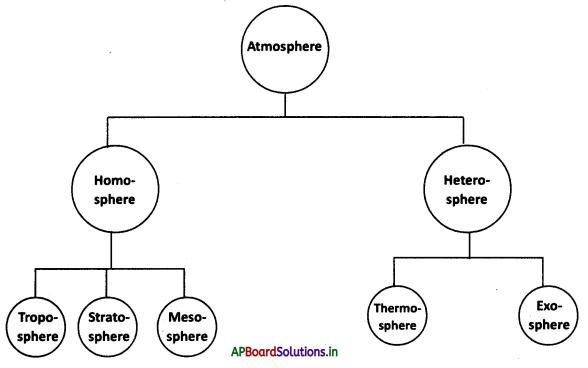 → Hygrometer is an instrument that measures the water vapour content (humidity) of the air.