Students can go through AP State Board 10th Class Social Studies Notes Chapter 3 Production and Employment to understand and remember the concept easily.

→ People are engaged in different activities to earn their livelihoods.

→ The good becomes final if it is not used further in producing goods to be sold.

→ Gross Domestic Product is the value of all final goods and services produced within a country during a particular year.

→ The situation of underdevelopment where people are apparently working but all of them are made to work less than their potential.

→ This kind of unemployment is hidden in contrast to someone who does not have a job and is clearly visible as unemployed. Hence it is called ‘disguised unemployment.

→ Places of work of organized sector are registered by the government and have to follow its rules and regulations.

→ The unorganized sector is characterized by small and scattered units which have remained largely outside the control of the government.

→ We should invest in many industries, in both rural and semi-urban areas, so that we are able to produce many more goods and services.

→ We not only have to generate new employment opportunities but also train many workers to work efficiently and with machines.

→ Gross Domestic: It is the value of all final goods and services produced within a Product country during a particular year.

→ Final Goods: The goods become final if they are not used further in producing goods to be sold.

→ Organized sector: Enterprises or places of work where the terms of employment are regular and therefore, people have assured work.

→ Unorganized sector: Small and scattered units where Jobs are low-paid and not regular and have remained largely outside the control of the government.

→ Financial year: A period of twelve months over which the accounts and taxes of a company or a person are calculated. For example, April 2017 to March 2018 Is called financial year 201 7-18.

→ Occupation: DIfferent activities In which people are engaged to earn their livelihood.

→ Primary sector: Agriculture and related activities such as farming, fishing, forestry, mining where nature has a dominant role In the production process.

→ Secondary sector: Manufacturing processes and other industries, where goods are produced by people using tools or machines.

→ Service sector: Those activities that don’t directly produce a good but provide services that are required in production and other services for people.

→ Unpaid work: Work done at home like cooking, cleaning, organizing, bringing up children, etc. does not involve In any monetary transaction.

→ Employment: Individuals are gainfully engaged In productive work or service,

→ Unemployment: Individuals are not gainfully employed In any productive work.

→ Underemployment: The state of each one Is doing some work and no one is fully employed.

→ Disguised Unemployment: The situation of under-employment where people are apparently working but all of them are made to work less than their potential. 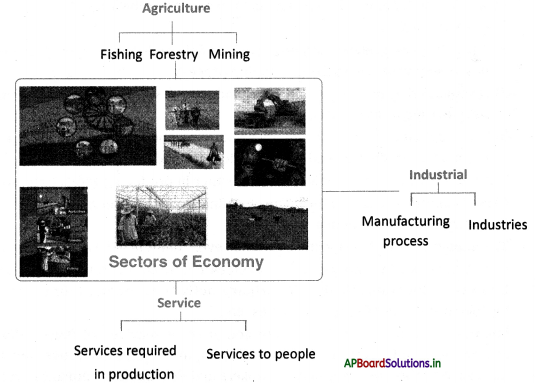 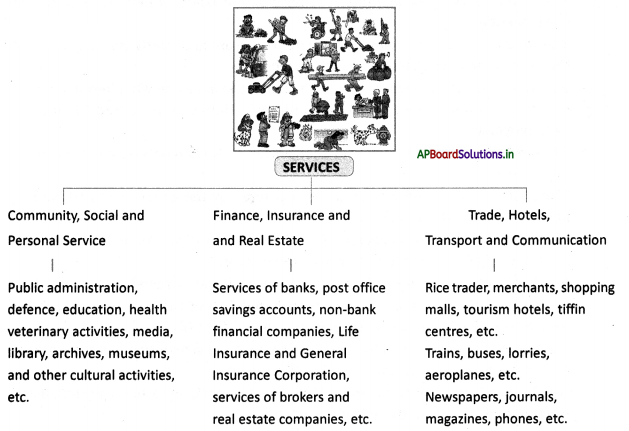