→ The cell is the source of electrical energy in a torchlight.

→ Do not connect the two terminals of a cell with a single wire.

→ The bulb consists of a filament that gives light and two terminals.

→ A circuit consists of a cell (power source), a bulb, and connecting wires.

→ An electric circuit provides a complete path for electricity to flow between the cell and the bulb.

→ Electricity requires a closed path for it to flow.

→ A switch helps us to allow or break the flow of electricity in a circuit.

→ The flow of electricity in a circuit is called a current.

→ A torchlight consists of a cell, a bulb, and a switch.

→ Substances that do not allow the flow of electricity are known as insulators.

→ The electric bulb was invented by Thomas Alva Edison.

→ Electricity: The flow of electrons is known as electricity.

→ Cell: Cell is the source of energy. An electric cell is a sort of container that produces electricity from the chemical stored inside it.

→ Bulb: An electric bulb is a device that produces light when electricity is passed through its terminals. There are different types of bulbs.

→ Fused bulb: A bulb is said to be fused if the filament gets broken. The fused bulb does not glow.

→ Filament: The metal resistance wire inside a bulb that transfers electrical energy to light.

→ Switch: A device for making and breaking the connection in an electric circuit.

→ Circuit: An electrical circuit is a path in which electrons from a current source flow.

→ Conductor: The material which permits (allow) the electric current to pass through it.

→ Insulator: The material which resists the current to flow through them.

→ Tungsten: A type of metal used for making filaments.

→ LED bulb: LED stands for the light-emitting diode. It is an energy efficiency bulb.

→ Electric shock: A reflex response to the passage of electric current through the body. 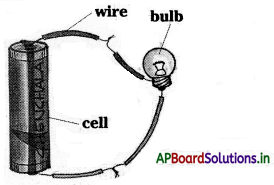