Students can go through AP State Board 7th Class Science Notes Chapter 17 Changes Around Us to understand and remember the concept easily.

→ The events which repeat at regular intervals of time are called periodical events.

→ When a material undergoes a change in shape, size, colour or state, it is called a physical change.

→ No new substance is formed in a physical change.

→ The type of change that leads to the formation of a new substance is known as chemical change.

→ The process of depositing a layer of zinc or chromium on iron is called Galvanisation.

→ Coldwater prevents the outer surface of the Potato and brinjal from colouring.

→ The process of separating a soluble solid from the solution by heating or evaporating is called crystallization.

→ Changes mainly are of two types. Physical and Chemical.

→ When a material undergoes a change in shape, size, colour or state without a new substance getting formed, then it is called a physical change.

→ In a physical change generally, no new substance is formed.

→ When a material undergoes a change in its composition, it is called a chemical change.

→ In a chemical change, a new substance is formed.

→ A chemical change is also called a chemical reaction.

→ In any change heat, light, radiation or sounds may also be produced.

→ In a change, new colour or smell may appear.

→ The process of separating a soluble solid from the Solution on heating is called Crystallization.

→ The process of depositing one metal on another metal is called Galvanisation.

→ Reversible: Which can be reversed.

→ IrreversIble: irrevocable; not able to reverse

→ Rust: The reddish-yellow coating formed on iron when exposed to moist air.

→ Physical change: A reversible change in a substance’s properties.

→ Composition: The act of composing

→ Vinegar: A sour liquid obtained by the fermentation of unique

→ Baking soda: (Sodium bicarbonate) The addition of moisture or heating causes a reaction that produces bulbs of CO2 gas, which make dough or cake mixture rise.

→ Galvanisation: Subject to the action of electric current

→ CrystallIzation: Separating a soluble solid from the solution on heating

→ Corrosion: Reaction of metal with acid, oxygen, or other compounds with the destruction of the surface of the metal. 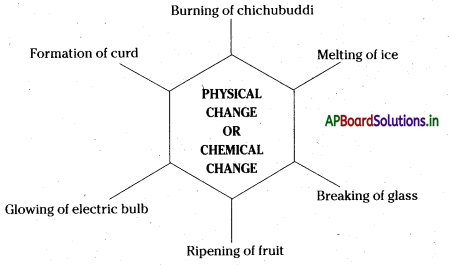 → Henrich Hertz:
Hertz was born in 1857. A German Physicist, who proved that electromagnetic waves take time to travel. He sent and received Electromagnetic waves over the Atlantic Ocean. His name was immortalized by the word “Hertz’ the unit of frequency. He died in the year 1894.