Students can go through AP State Board 8th Class Biology Notes Chapter 2 Cell: The Basic Unit of Life to understand and remember the concept easily.

→ All living organisms are made of cells.

→ Cells were first observed by Robert Hooke in 1665.

→ Antonie Van Leeuwenhoek was the first to see living bodies under the microscope which he had constructed himself.

→ Robert Brown discovered the nucleus in the orchid leaf.

→ Plant cells differ from those of animals in having an additional layer around the cell membrane termed cell wall.

→ The cell wall gives strength and rigidity to plants.

→ Cell exhibits a variety of shapes and sizes and numbers.

→ More than one cell is called a multicellular organism.

→ Basic functions in multi-cellular organisms are carried out by a variety of cells.

→ Cell: The smallest biological unit capable of carrying out all of the fundamental activities of life. The basic unit of structure and function of any living thing.

→ Cell membrane: The thin, flexible layer that surrounds a cell and which controls all that enters and leaves the cell.

→ Cytoplasm: That part of a cell’s protoplasm that lies outside of its nucleus.

→ Nucleus: A spherical structure present at the center of the cell.

→ Unicellular: An organism composed of just one cell.

→ Multicellular: Organism formed by more than one cell.

→ Organ: All organisms are made of smaller particles called organs.

→ Organelles: The small functional structures of the cell.

→ Pseudopodia: False feet or the structures formed by the unicellular organisms to capture food or for locomotion.

→ Staining: Obtain color to the cells

→ Magnification: Expanding the size of the structure

→ Focusing: To visualize the object by light

→ Centriole: In animal cells, a structure outside the nucleus organizes the spindle fibers during cell reproduction.

→ Contractile Vacuoles: Large sacs found ¡n the cells of certain protozoans that remove the water that has accumulated inside the cell by pumping it to the outside of the cell.

→ Food Vacuoles: The sacs where food particles are digested that are found in the cytoplasm of protozoan cells.

→ Heterogeneous: Different state of features in a group

→ Teeming: Occupying the full of container

→ Contractile vacuole: A sac-like cell organelle that pumps fluid in a cyclic manner 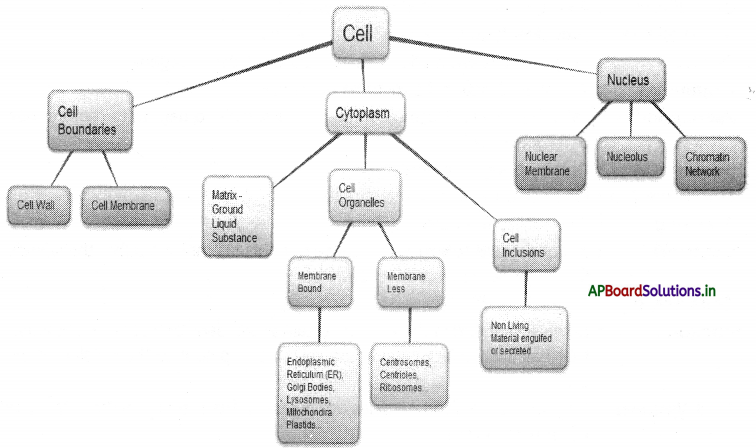 → Antonie Van Leeuwenhoek (1632-1723) in 1674 was the first human to see living bodies like bacteria, yeast, protozoa, Red Blood cells, and the teeming life in a drop of water. He prepared several types of magnifying glasses and used his lenses to study both living and non-living things using under a microscope.