→ The disasters that are caused because of human negligence or deliberately by an individual or a group can be termed as Human-made.

→ Road, rail and air accidents are some of the disasters that one faces every day.

→ In India, about eighty thousand people are killed in road crashes every year.

→ Railway transportation appeared at earlier times to be safe due to slower speeds, shorter trips, and lower density traffic.

→ Across the world including India, air accidents have increased.

→ Fire is a phenomenon of combustion manifested in intense heat and light in the form of a glow or flames.

→ Mahatma Gandhi preached ahimsa or non-violence and truth as the tools for peaceful resolution of issues between people, communities, or countries.

→ Terrorism has become common in certain areas of the world, including parts of India.

→ Citizen safety is the concern of all. Different measures are adopted by various agencies to create awareness of safety.

→ World community The term is used primarily in political and humanitarian contexts to describe an international aggregate of nation-states of widely varying types.

→ Terrorism: The use of violence and intimidation in the pursuit of political aims.

→ Human-Induced Disaster: A disastrous event caused directly and principally by one or more identifiable deliberate or negligent human action.

→ Hijacking: To take control of an aircraft or other vehicle during a journey using violence.

→ Railway crossing: The metal tracks on which trains run. 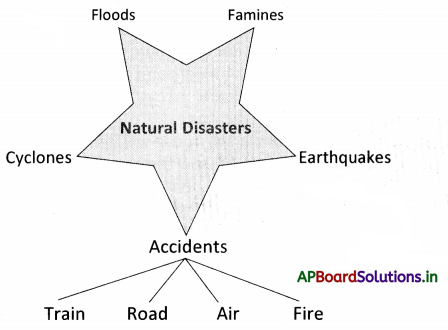