→ Air, water, and moderate temperature have made life possible on the earth.

→ AH, forms of life have an integral connection with the land, air, water, and sunshine around them.

→ Many forms of life are symbiotic that is they live by exchanging essential substances with each other.

→ Plants are the primary food producers.

→ Any disturbance in the cycle of life can create an ecological crisis.

→ Since all living and non-living things on earth are in one way or the other connected to each other, change affecting one, in due time affects all others too.

→ Natural vegetation is generally classified into three broad categories.
(a) Forests in areas of sufficient rainfall and sunshine.
(b) Grasslands regions of moderate rains.
(c) Shrubs in dry regions.

→ The thick forests which occur in the regions near the equator and close to the tropics are called tropical rainforests (or) tropical evergreen forests.

→ The forests in which trees shed their leaves and occur in the regions i&htch experience seasonal changes are called Tropical Deciduous Forests.

→ The forests which are located in the mid latitudinal coastal region are called the temperate Evergreen Forests.

→ The forests in which trees shed their leaves in the dry season and are located in higher latitudes are called Temperate Deciduous Forests.

→ The forests which are located in the west and southwest margins of the continents are called the Mediterranean Vegetation.

→ The trees which can be seen in the higher altitudes, in which tall softwood evergreen trees are grown are called Coniferous Forests.

→ The grasslands that grow on either side of the equator and extend to the tropics are called Tropical grasslands.

→ The thorny vegetation found in the dry desert-like regions is called Thorny bushes. The mosses; lichens and very small shrubs found in polar regions are called Tundra type of vegetation.

→ The building of knowledge of the environment is an essential part of human being’s interaction with the natural world.

→ The increase in population creates great pressure on earth as well as its resources.

→ The immense human industrial activity has had a profound impact on the air; water and the land around us.

→ The burning of fossil fuels releases large quantities of carbon dioxide and other chemicals that cause acid rains.

→ The burning of fossil fuels, release of enormous amounts of waste materials contaminate the air, water, and soil.

→ The cumulative impact of pollution poisons our environment which leads to global warming.

→ The extra radiation received at the earth’s surface produces the greenhouse effect The Greenhouse effect in simple terms is the property of the atmosphere, which permits sunlight rather easily and releases that heat with great difficulty.

→ The fertilizers and pesticides used in agriculture eventually remain in the soil and also mix with water and result in contamination of water and soil Urbanisation causes a number of environmental problems.

→ Food chain: It is a complex phenomenon in which one kind of life becomes the food for another kind and so on.

→ Hardwood trees: These are the trees that yield hardwood necessary for making furniture, doors, and windows, etc.

→ Acid rains: Acid rains are caused by the mingling of acid particles of the atmosphere with rain increasing the acid content of rainwater.

→ Global warming: The increase in temperature of the earth’s atmosphere that is caused by the impact of pollutants especially carbon dioxide in the atmosphere.

→ Fossil / Fuel: The remains of animals I plant, which had turned into rock.

→ Steppe: A large land of grass with few trees here and there.

→ Biosphere: The separate sphere that constitutes countless forms of life from microscopic bacteria to great Banyan trees and animals like elephants, tigers, and blue whales and of course human beings is called Biosphere.

→ Eutrophication: An increase in the rate of supply of organic matter in an ecosystem. 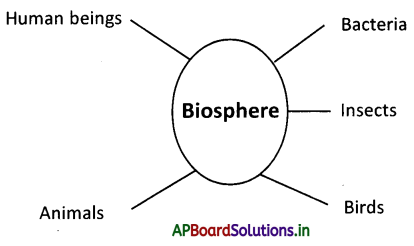 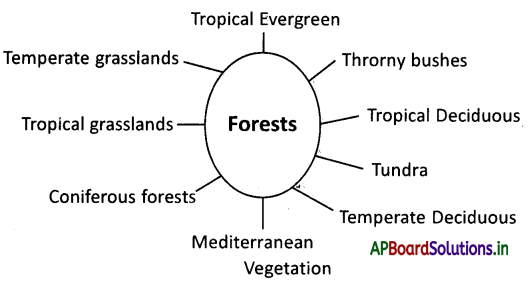 → Kyoto Protocol:
A conference was held in the city of Kyoto in Japan under United Nations Organization in December 1997 to protect mother earth from global warming. The countries that attended realized the effect of Green House Gases and signed a declaration called the Kyoto Protocol. The main aim of this is to bring down the release of Green House Gases to less than 5.2%. According to this declaration, this aim should be achieved between 2008-2012.

→ Approximately 13-15 tonnes of effluents and sewage water reach Kolleru lake daily from its nearby towns and villages.

→ One study found that the radiation released by cell phone towers affects the life of honey bees. This leads not only to a scarcity of honey but also affects pollination, biodiversity, and here agricultural products.