Question 1.
In what way did Canal Transportation aid Industrial Revolution? (SA-I : 2019-20)
Answer:
Canals were the answer to moving heavy objects to large distances

Question 2.
Why did modem industrialisatfon first occured in Britain only? (SA-III : 2016-17)
(OR)
Why do you think Britain was the first country to Industrialize?
Answer:

Medicine:
Anti-biotics, vaccines, chloroforms, Anti-virus, etc. Now-a-days world become a big village by a fastest means of transport. Even long distance also reached in a short time. Due to medicines, the life expectancy of human being is increased.

Question 1.
The road-builder John Metacalf, who personally surveyed surfaces for roads and planned them, was blind. The canal builder James Brindley was almost illiterate, with such poor spelling that he could never spell the word ‘navigation’, but he had tremendous powers of memory, imagination and concentration.
Read the paragraph given above and comment on that. (SA-III : 2016-17)
Answer:
According to the above para, if we want to invent a new thing we need more determination, interest, curiosity, even luck, than the application of scientific knowledge. Along with the above, memory, imagination, and concentration also need.

Question 4.
Explain how the condition of the workers steadily declined in the early twentieth century Europe. (SA-I : 2019-20)
Answer:
Conditions of the worker.
1. The aboudance of labour in the market affected.

2. Seasonality of work :
It meant prolonged periods without work.

4. Poverty and Unemployment:
At the mid of 19th century, about 10 percent of Urban population was extremely poor.

The Unemployment rate was very high.

Question 2.
Who used the term ‘Industrial Revolution’?
Answer:
The term ‘Industrial Revolution’ was used by European scholars – Georges Michelet in France and Friedrich Engels in Germany. It was used for the first time in English by the philosopher and economist Arnold Toynbee (1852-83), to describe the changes that occurred in British industrial development between 1760 and 1820.

Question 3.
What were the two main features of cotton industry?
Answer:
From the 1780s, the cotton industry symbolised British industrialisation in many ways. This industry had two features which were also seen in other industries. Raw cotton had to be entirely imported and a large part of the finished cloth was exported to other countries. Britain had its control over the sources of raw cotton as well as the markets. Where they sold cloth. This helped to increase its control over the colonies.

Question 4.
What was the new power source in England?
Answer:
Steam

Question 6.
Name any bank in England.
Answer:
The Bank of England.

Question 9.
What is Industrial revolution? Who coined this name?
Answer:

Question 10.
What do you know about the picture?

Answer:
This was the Cast Iron Bridge. It was near Coalbrookdale. It was designed by the third Darby.

Question 11.
What was it? How did it look like?

Answer:
This was James Watt’s steam engine. It was just looking like our present day tractor.

Question 12.
Compare the effects of the coming of the railways in different countries in the world.
Answer:

Britain :
The railways changed British Society in numerous ways. It is nonetheless clear that the railways had a sizeable impact in many spheres of economic activity and daily life of the people.

India :
India provides an example of the British empire pouring its money into a very well built system designed for military reasons and with the hope that it would stimulate industry. The system was over built and much too elaborate and expensive for the small amount of freight traffic it carried.

France:
In France, railways became a national medium for the modernisation of backward regions. Although starting the whole system at once was politically expedient, it delayed completion and forced even more reliance and temporary experts brought in from Britain.

Germany:
The take-off stage of economic development came with the railroad revolution in the 1840s. As a means of national defence, it facilitates the concentration, distributional direction of the army. It is a means to the improvement of the culture of the nation.

Russians:
It was Americans who brought the technology of railway construction to Russia in 1842. Russia was in need of big transportation system and geographically suited to railroads.

Thus the railways in different countries helped the industrial revolution in transportation.

Question 13.
Read the following passages and answer the given questions.

The Krupp family established what was going to become the world’s largest arms factory. This first factory specialised in field gun manufacture and, by 1887, it supplied arms to forty six different countries.

During World War I the Krupp factories made guns for the German artillery.

The Krupps supported Hitler in the German general election of 1933. As Nazi Germany occupied neighbouring countries, Alfred Krupp seized new land to make more factories. Many of these factories used slave-labour from the Nazi concentration camps.

1) What was the name of the family?
Answer:
The ’Krupp’ family.

2) What was the first factory?
Answer:
Gun manufacturing factory.

5) Who were the workers in the factories?
Answer:
The slave – labour from the Nazi concentration camps.

Question 14.
Read the following passages and answer the given questions.
Steam power was first used in mining industries. As the demand for coal and metals expanded, efforts to obtain them from ever-deeper mines intensified. Flooding in mines was a serious problem and steam engines were used to drain the mines. But the technology was still very imperfect to be used on a large scale.

James Watt’s (1736-1819) invention converted the steam engine from being a mere pump into a ‘prime mover’ capable of providing energy to power machines in factories. Backed by the wealthy manufacturer Matthew Boulton (1728-1809), Watt created the Soho Foundry in Birmingham in 1775. From this foundry James Watt’s steam engines were produced in steadily growing numbers. By the end of the eighteenth century, Watt’s steam engine was beginning to replace hydraulic power. In 1840, British steam engines were generating more than 70 per cent of all European power.
1) Which power was first used in mining industries?
Answer:
Steam power

3) Who was the wealthy manufacturer?
Answer:
Matthew Boulton.

4) In which foundry were the Watt’s engines produced?
Answer:
In Soho Foundry in Birmingham.

Question 15.
Read the following passages and answer the given questions.
Transportation
The need to transport raw materials and manufactured products led to the improvement of roads and the digging of canals in England. Me Adam devised the method of making ‘pakka’ or ‘macadamamised’ roads.

4) What is the name of first English canal?
Answer:
Worsley Canal.

5) What was the interest of land owners in building the first canal?
Answer:
They were interested in enhancing the values of their properties.

Question 16.
Observe the following picture and answer the given questions. 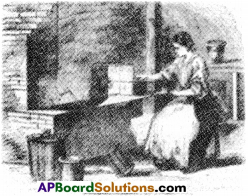 2) Where was the factory?
Answer:
It was in Birmingham.

3) Which year did the picture belonged to?
Answer:
It belonged to the 1850s.

5) Is there any difference in the working time?
A. No, it was equal to all.

Question 17.
Read the following passages and answer the questions given below.

A survey in 1842 revealed that the average lifespan of workers was lower than that of any other social group in cities: it was 15 years in Birmingham, 17 in Manchester, 21 in Derby. More people died, and died at a younger age, in the new industrial cities, than in the villages they had come from. Half the children failed to survive beyond the age of five. The increase in the population of cities was because of immigrants, rather than by an increase in the number of children born to families who already lived there.

Deaths were primarily caused by epidemics of disease that sprang from the pollution of water, like cholera and typhoid, or of the air, like tuberculosis. More than 31,000 people died from an outbreak of cholera in 1832. Until late in the nineteenth century, municipal authorities were negligent in attending to these dangerous conditions of life. The medical knowledge to understand and cure these diseases was unknown.
1) When was the survey conducted?
Answer:
In 1842.

2) What was the average lifespan?
Answer:
It was 15 years in Birhingham, 17 in Manchester, and 21 in Derby.

4) What are the diseases mentioned here?
Answer:
Cholera, Typhoid, and Tuberculosis.

5) Why were the municipal authorities negligent in attending to these diseases?
Answer:
The medical knowledge to understand and cure these diseases was unknown.

Question 18.
Read the lesson and prepare any four questions relating to it.
Answer:

Question 19.
What were the relative advantages of canal and railway transportation?
Answer:

Question 20.
Why was Britain the first country to experience modern industrialisation?
Answer:
Reasons:

Question 21.
Write the favourable conditions which helped the inventions.
Answer:
It is interesting to read about the individuals who brought about these changes during industralisation. Few of them were trained scientists. Education in basic sciences like physics or chemistry was extremely limited until the late nineteenth century, even after the technological inventions described above. Since these inventions did not require a full knowledge of the laws of physics or chemistry on which they were based, advances in science could be and were made by brilliant, intuitive thinkers and persistent experimenters.

They were helped by the fact that England had certain features which other European countries did not. Dozens of scientific journals and published papers of scientific societies appeared in England between 1760 and 1800. There was a widespread thirst for knowledge even in the smaller towns. This was met by the activities of the Society of Arts (founded in 1754), by travelling lecturers, or in ‘coffee houses’ that multiplied through the eighteenth century.

Question 22.
Appreciate the efforts of German to become an Industrialised state.
Answer: