Question 2.
Write any two slogans about abolition of child labour. (SA-II : 2017-18)
Answer:
1. Child is your heart not born to push your cart.
2. Children are the future heroes, they need to learn before they can work.

Question 1.
Read the following situations. Which Fundamental Right is being violated in each case and how? (SA-II : 2018-19)
i. A director who makes a documentary film that criticizes the policies of the government is arrested and sent to prison.
ii. A ten years old boy is not allotted to go to school and is forced to work in a firecracker factory.
Answer:
i) In first case Right to freedom of speech and expression is violated. Everyone has a right to express their opinion on the administration of govt. But some limitations are there.
ii) In the second case, Right against exploitation is violated.
The Constitution says “no child below the age of 14 shall be employed engaged in any other hazardous employment.

Question 2.
Read the following concepts and write under the table with relevant fundamental right. (SA-II : 2017-18)

Question 2.
What are the functions of NHRC?
Answer: 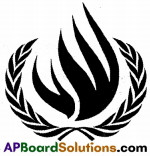 iv) What does the above Logo stand for?
Answer:
It is the logo of Human Rights designed by the United Nations Organization.

Question 6.
Gather certain information about violation of fundamental rights and how the court protected them.
Answer:
I.