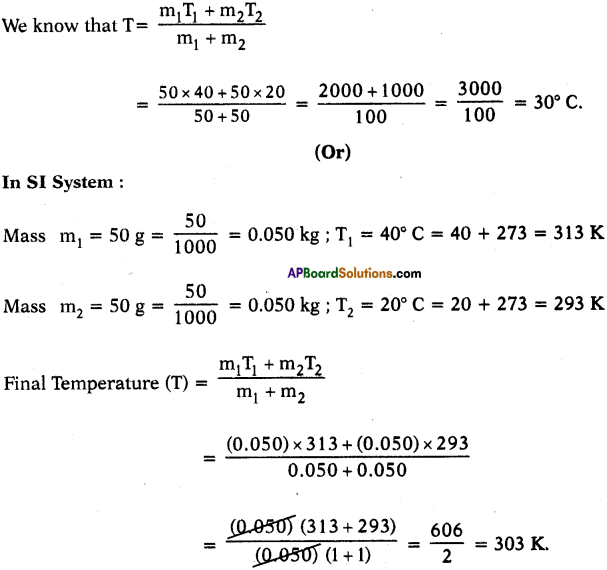 Question 4.
Write the differences between evaporation and boiling. (AS1)
(OR)
Sita observed decrease in quantity of spirit kept in a vessel placed in open air. Whereas Ramu observed formation of bubbles on a water surface when it is heated. What are those two processes? Distinguish between those two processes.
Answer:

Question 5.
Does the surrounding air become warm or cool when vapour phase of H2O condenses? Explain. (AS1)
Answer:

Question 9.
Your friend is asked to differentiate between evaporation and boiling. What questions could you ask to make him to know the differences between evaporation and boiling? (AS2)
(OR)
Veena found that the water kept in a pot is cool and Siva observed when water is heated the temperature remains constant for some time until water turns into vapour. What are the processes involved in these two aspects? Ask some questions to understand these aspects.
Answer:
The questions asked by me are :

Question 10.
What happens to the water when wet clothes dry? (AS3)
Answer:

Question 13.
Place a Pyrex funnel with its mouth-down in a sauce pan full of water, in such a way that the stem tube of the funnel is above the water or pointing upward into air. Rest the edge of the bottom portion of the funnel on a nail or on a coin so that water can get under it. Place the pan on a stove and heat it till it begins to boil. Where do the bubbles form first? Why? Can you explain how a natural geyser works using this experience? (AS4)
Answer: 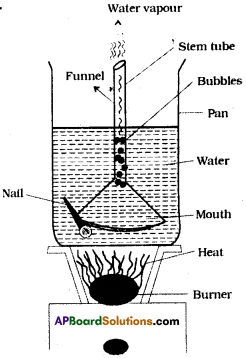 Working of natural geyser by using this experience :

Question 14.
Collect the information about working of natural geyser and prepare a report. (AS4)
Answer:
Natural Geysers :

Question 15.
Assume that heat is being supplied continuously to 2 kg of ice at – 5°C. You know that ice melts at 0°C and boils at 100°C. Continue the heating till it starts boiling. Note the temperature for every minute. Draw a graph between temperature and time using the values you get. What do you understand from the graph ? Write the conclusions. (AS5)
Answer:
Graph between time and temperature from ice melting at 5° C to boils at 100° C. 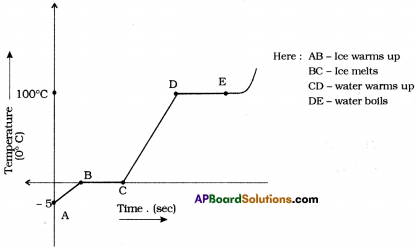 Understanding from the graph :

Question 16.
How do you appreciate the role of the higher specific heat of water in stabilising atmospheric temperature during winter and summer seasons? (AS6)
Answer:

Question 18.
What role does specific heat play in keeping a watermelon cool for a long time after removing it from a fridge on a hot day? (AS7)
Answer:

Question 19.
If you are chilly outside the shower stall, why do you feel warm after the bath if you stay in bathroom? (AS7)
Answer:

Question 1.
Take a piece of wood and a piece of metal and keep them in a fridge or ice box. After 15 minutes, take them out and ask your friend to touch them. Which is colder? Why?
Answer:
1) The metal piece is colder than the wooden piece.
2) Because more heat energy flows out of our body so metal piece gives coldness to our body, than wooden piece.

Question 2.
What could be the reason for difference in coldness of metal and wood?
Answer:

Question 3.
Does it have any relation to the transfer of heat energy from our body to the object?
Answer:

Question 4.
Why does transfer of heat energy take place between objects?
Answer:

Question 6.
What are the conditions for transfer of heat energy?
Answer:

Question 7.
What is temperature?
(OR)
Define temperature.
Answer:
Temperature : The measure of hotness or coldness of a body is called temperature.

Question 8.
How can you differentiate temperature from heat?
Answer:

Question 13.
Take two bowls one with hot water and second with cold water. Gently sprinkle food colour on the surface of the water in both bowls. How do food grains move? Why do they move randomly?
Answer:
We will notice that the grains of food colour move randomly (jiggle). This happens because of the molecules of water on both bowls are in random motion. 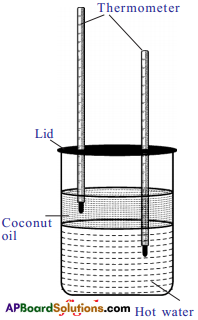 b) Can you say that water loses energy’?
Answer:

Question 16.
Place two test tubes containing 50 gm of water, 50 gm of oil in boiling water for same time.
a) In which material does the temperature rise quickly? Are the amounts of heat given to the water and oil same? How can you assume this?
Answer:

b) Why does this happen in specific heat?
Answer:
This happens because rise in temperature depends on the nature of substance.

Question 17.
How much heat energy is required to rise the temperature of unit mass of substance (material) by 1°C?
Answer:
Energy equal to its specific heat.

Question 19.
Take 200 ml of water in two beakers and heat them to same temperature and pour the water of two beakers into a larger beaker.
What do you observe? What could be the reason for the fact you observed?
Answer:

Question 20.
Heat the water in one beaker to 90°C and the other to 60°C. Mix the water from these beakers in large beaker. What will be the temperature of the mixture? What did you notice? Can you give reason for the change in temperature?
Answer:

Question 23.
Pour a few drops of spirit on your palm. Why does your skin become colder? (1 Mark)
Answer:
Spirit absorbs heat energy from our palm and evaporates. So our palm becomes colder.

Question 24.
Take a few drops of spirit in two petri dishes separately. Keep one of the dishes under a ceiling fan and switch on the fan. Keep another dish with its lid closed. What do you notice? What could be the reason for this change?
Answer:
1) The spirit in the dish which is kept under the ceiling fan disappears.
2) Whereas we will find some spirit left in the dish that is kept in the lidded dish.
3) The molecules which are escaping from the surface is high and they can’t reach back to liquid due to wind blow. So, evaporation is high under fan.
4) At the same time evaporation is less in the dish which is closed by lid.

Question 26.
In early morning, during winter, you might have noticed that water droplets form on window panes, flowers, grass, etc. How are these water droplets formed?
(OR)
Why do water drops (dew) form on flowers and grass during morning hours of winter season?
Answer:

Question 27.
Are the process of evaporation and boiling the same? Explain.
Answer:

Question 28.
You might have observed coconut oil and ghee getting converted from liquid state to solid state during winter season. What could be the reason for this change? What happens to water kept in a refrigerator? How does it get converted from liquid phase to solid phase?
Answer:
1) If temperature of a substance decreases kinetic energy also decreases.
2) Kinetic energy decreases from water to ice. That means solid state to liquid state.
3) In winter season coconut oil in the form of liquid get down its temperature, hence its kinetic energy also decreases. So, it-freezes.
4) Water, which is kept in refrigerator loses the kinetic energy along with decreasing temperature and freezes.
5) In this way water converted liquid phase to solid phase.

Question 29.
Are the volumes of water and ice formed with same amount of water equal? Why?
Answer:
1) No, the volume of ice is greater than volume of water.
2) Water expands on freezing.
3) That means density of ice is less than density of water.

1. Explain the term temperature with example.
(OR)
What is the name given to degree of hotness or coldness? Explain the quantity with an example.
Answer:
Procedure: Take a piece of wood and a piece of metal and keep them in fridge or ice box.
Observation : When we touch both of them we feel that metal piece is colder than the wooden piece.

2. What is the measure of thermal equilibrium? How do you prove?
(OR)
How do you prove temperature is the measure of thermal equilibrium?
(OR)
Explain thermal equilibrium with an activity.
Answer:
Procedure :
Take two glass tumblers and fill one of them with hot water and another with cold water.
Explanation & Observation :
1) When we place a thermometer inside the hot water the mercury level of thermometer rises from initial position due to heat transferred from hotter body (hot water) to colder body (mercury in thermometer).
2) When we place the thermometer inside the cold water the mercury level comes down from its initial position due to transfer of heat from mercury (hotter body) to water (colder body).

Observation :
We will observe the jiggling of grains of food colour in hot water is more when compared to jiggling in cold water.

4. Write an activity which tells how heat transmits.
(OR)
In which direction does heat tend to flow? Prove it with an activity.
Answer: 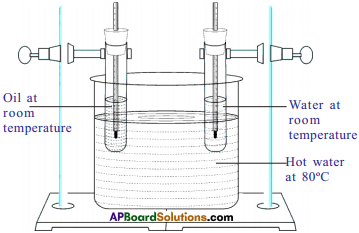 Conclusion :
From this we conclude that for some change in temperature the amount of heat (Q) absorbed by a substance is directly proportional to its mass (m).
Q ∝ m (when ∆T is constant) ………….. (1)

Procedure :
Now take 1 litre of water in a beaker and heat it and note the temperature changes (∆T) for every two minutes and observe the rise internals.

7. a) How are you able to find the final temperature of the mixture of sample?
(OR)
What is the “Principle of method of mixtures”? Verify it with an activity.
Answer:
Situation – 1 :

Observation :
We can observe that there is no change in temperature.

Observation :
We can find that the temperature of mixture is 75° C.

Observation :
We will notice that spirit in the dish kept under the ceiling fan disappears whereas we will find some spirit left in the dish that is kept in the lidded dish.

Conclusion :
When a liquid is exposed to air, the molecules at the surface keep on escaping from the surface till the entire liquid disappears into air. This process is called evaporation.

Observation :
There are droplets formed outside of the glass.

10. Explain the process of boiling with an example.
(OR)
Why do we observe bubbles on the surface of water which has been heated ? What is the phenomenon involved in it? Explain.
Answer:
Procedure :
Take a beaker of water, keep it on the burner and note the readings of thermometer for every two minutes.

11. Explain the process of melting and latent heat of fusion.
(OR)
When ice is heated to 0°C it starts to turn into water. But temperature remains ‘ constant for some time. What is the process involved in this? Explain.
Answer:
Procedure :

Observation :
When we take it out from the deep freezer, we can observe that the glass bottle breaks.