Question 1.
According to the given table below, which area is the eastern side?

Answer:
According to the given table, Imphal is the eastern side.

Question 5.
Read the map given and answer the questions.

a) Name the latitude that divides India into two parts.
Answer:
Tropic of Cancer / 23°30′ Northern latitude.
b) On which longitude, is Indian Standard Time based upon?
Answer:
82°30′ Eastern longitude.

Question 6.
Mention any one difference between the physical features of the Andaman and Nicobar islands and the Lakshadweep.
Answer:

Question 7.
Mention any two differences between the Western and Eastern Ghats.
Answer:

Question 11.
What do you mean by “Doab”?
Answer:
The fertile land between two rivers is known as the Doab feature. ‘Do’ means two, ‘ab’ means water.

Question 17.
What do you mean by “Dun”? Give one example.
Answer:
The valleys lying between the lesser Himalayas and Shivalik ranges are called “Duns’’, e.g. Dehra Dun.

Question 19.
Name three major divisions of the Himalayas from North to South.
Answer:

Question 20.
Name the island group of India having a coral origin.
Answer:
Lakshadweep.

Question 22.
Identify the regional division of the Northern plains.
Answer:

Question 23.
What are the relief features that are found in the Northern plains?
Answer:

Question 24.
Which landform feature was a part of Gondwana land?
Answer:
Peninsular Plateau.

Question 25.
Which plateau lies between the Aravalis and the Vindhya range?
Answer:
Malwa Plateau.

Question 27.
What is Bhangar?
Answer:
Bhangar is the largest part of the northern plains and is formed by the oldest alluvium.

Question 28.
What is Khadar?
Answer:
The younger alluvium deposit is called Khadar.

Question 29.
What is a reef?
Answer:
A ridge of jagged rock formed from coral secretions and skeletons.

Question 36.
What are Duns?
Answer:
The longitudinal valleys between the Lesser Himalayas and the Shivaliks are known as Duns,
e.g.: Dehradun, Patli dun and Kotli dun.

Question 37.
Where is Bhabar located?
Answer:
Bhabar is located at the foot of the Shivaliks.

Question 38.
What are the two divisions in the Peninsular Plateau?
Answer:
Central Highlands and Deccan Plateau.

Question 40.
What is the other name of Ooty?
Answer:
Udagamandalam.

Question 42.
Name the Peninsular rivers.
Answer:
The Godavari, the Krishna and the Cauveri.

Question 2.
Study the following map and answer the questions given below:
a) Name the two countries that share their land boundaries with India.
b) In between which latitudes, is India located?
Answer:
a) Pakistan, China, Nepal, Bangladesh, Bhutan, Myanmar.
b) 8°4′ – 37°6′ Northern latitudes.

Question 4.
Discuss the significant differences between the Himalayan Rivers and the Peninsular Rivers.
Answer:

Question 7.
How are the Himalayas divided regionally or on the basis of river valleys?
Answer:

Question 8.
Look at the picture and comment on it.
Answer:
It is a sketch of different levels of vegetation in the Himalayas. There are 5 levels in that vegetation.
Level I: On the top of the mountains there is no vegetation.
Level II: On the hill slopes – there is only grass.
Level III: Next to the level II – this area is covered with conifers.
Level IV: Next to level III – this area is covered with broadleaf trees.
Level V: At the feet of the mountains. It is Terai with tree cover.

Question 9.
Write a short note on the Great Indian Desert.
Answer:
The Great Indian desert lies towards the western margins of the Aravalli Hills.
The region gets scanty rainfall. Hence the climate is arid and vegetation is scanty. Luni is the only large river. Some streams appear during rainy season. Crescent-shaped duns are formed around in this area.

Question 4.
In what ways is the Indo-Gangetic plain different from the Peninsular plateau?
Answer:

Question 5.
Read the following paragraph and comment on Indian climate and the Himalayas.
The formation of the Himalayas influences the climate in various ways. These act as barriers protecting the great plains of India from the cold winds of central Asia during severe winter. The Himalayas are the reason for summer rains and monsoon type of climate in regions that are beyond the Western Ghats of India. In its absence, this region would have remained drier.
Answer:

Question 6.
How the Himalayas are influencing the climate of India and agriculture?
Answer:

Question 8.
Explain the differences between the Eastern Ghats and the Western Ghats,
Answer:

Question 10.
Prepare a table showing the particulars of different mountain ranges of the Himalayas.
Answer:

Question 11.
What is the importance of the Himalayas?
Answer:

Question 13.
Read the following paragraph and write your opinion on its content.
The formation of the Himalayas influences the climate in various ways. These act as hornets protecting the great plains of India from the cold winds of central Asia during severe winter. The Himalayas are the reason for summer rains and monsoon type climate in regions that are beyond the Western Ghats of India. In its absence, this region would have remained drier. The Himalayan Rivers have a perennial flow since these are fed by the glaciers and bring a fat of silt, making these plains very fertile.
Answer:

Question 14.
Read the following paragraph and write your opinion on the condition of the area as well as people living there.
The Thar Desert is located on the leeward side afAravalis and receives very low amount of rainfall, ranging from 100 to 150 mm per year. The desert consists of an undulating sandy plain and rocky outcrops. It occupies much of western Rajasthan. It has an arid climate with very law vegetation cover. Streams appear during the rainy season and disappear soon after. ‘Luni’ is the only river in this area. These internal drainage rivers fill into the lakes and don’t reach the sea.
Answer:

Question 15.
Read the following paragraph and write your opinion on the geographical location of India.
The geographical location of India provides its vast diversity in climatic conditions. This has led to a variety of vegetation and life forms along with advantages for growing many kinds of crops. Its long coastline and location in the Indian Ocean enabled trade routes as well as fishing.
Answer:

Question 16.
Observe the table and answer the questions.

Question 17.
Describe the formation and divisions of Indo-Gangetic plains.
Answer:

Question 18.
Describe the vairous aspects of the peninsular plateau.
Answer:

Question 20.
Read the given map and answer the following questions. 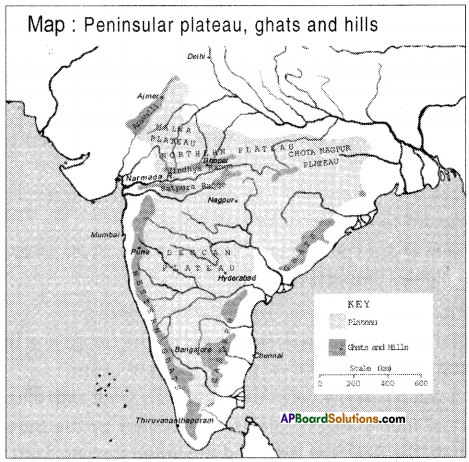 Question 21.
Read the given map and answer the following questions. 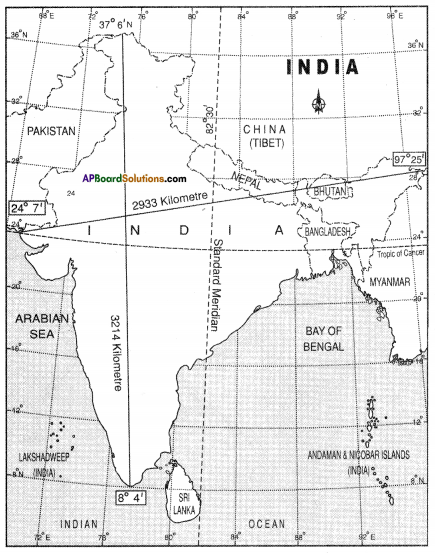 Question 22.
Locate the following in the given map of India. 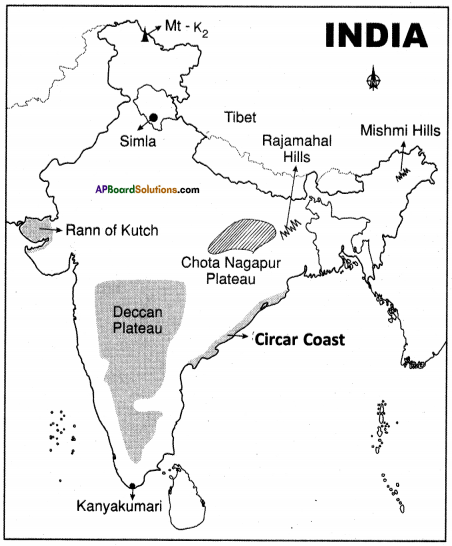