→ Dr. Caiyampudi Radhakrishna Rao (C.R. Rao) – India:
A wellknown statistician, famous for his theory of estimations. He worked on Cramer – Rao Inequality and Fisher – Rao theorem. His schooling was completed in Gudur, Nuzvid, Nandigama and Visakhapatnam. He studied M.A (Mathematics) in Andhra University. He obtained a Ph.D.Degree under the guidance of Sir R.A. Fisher.

→ The information either in form of pictures, numbers or words is called ‘Data’.

→ Based on the method of collecting information the data is divided into two different types namely ‘Primary, data’ and ‘Secondary data’.

→ The difference between maximum and minimum values of data is its ‘Range’.

→ The most common representative or Central Tendency Value of a grouped data is average or Arithmetic Mean.

→ Arithmetic Mean of given data always lies between the lowest and highest observations in the data.

→ The observation which occurs most frequently in the given data is ‘Mode’.

→ The middle most value of the data when the observations are arranged in either ascending or descending order is called Median.

→ Representation of numerical data by using bars of uniform width is Bar graph.

→ Representation of two sets of numerical data on the same graph by using bars of uniform width is Double bar graph.

→ A Pie chart is the representation of the numerical data by sectors of the circle such that angle of each sector (area of sector) is proportional to value of the given data.

→ Secondary data : Secondary data is the information which has been collected in the past by someone else but used by the investigator for his own purpose. The sources of secondary data are books, journals, newspapers, websites etc.

The median is the middle score for a given data that has been arranged in order of magnitude i.e. either in ascending order or in descending order. The median is less affected by maximum and minimum values of the data.

Let us consider the data below:

We first need to rearrange that data into order of magnitude (smallest first):

Now look at the example below:

We again rearrange that data into order of magnitude (smallest first):

→ The 3 most common measures of central, tendency are the mean, median and mode. The mode is the most frequent value. The median is the middle number in an ordered data set. The mean is the sum of all values divided by the total number of values.

→ Visual representation of the data: Data represented in the form of pictures, graphs or charts is visual data.

→ Bar graphs: Representation of numerical data by using bars of uniform width is called “Bar. Graph”.
In bar graphs the width of all bars or rectangles is equal and the height of each bar is proportional to the data that it represents.
Example : Bar graph showing the dates of births of a class during the months of a year. 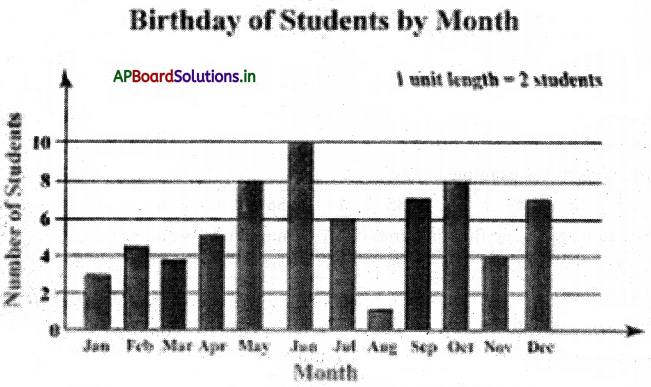 Example: A double bar graph showing the number of boys and girls in a primary school. 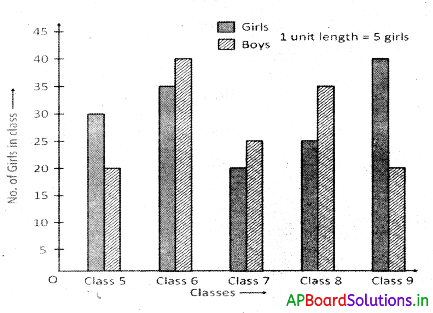 → Pie charts: A circle is divided into sectors to represent the given data is called a pie diagram or pie chart.
Or
Pie chart is the visual representation of the numerical data by sectors of a circle such that angle of each sector (area of sector) is proportional to the value of data that it represents.

→ Letter Series :
Letter series is a logical arrangement of English alphabetical letters arranged in a specific pattern. In this series of letters, groups of letters, combination of letters and numbers are given. Each letter or group is called term. The terms of a series are arranged in a particular order or pattern. We have to identify the pattern and find the missing term (next term) from the alternatives, which will satisfy the pattern. Assigning numbers to the alphabets is very useful to practice letter series.

Explanation:
This series consists of letters in a reverse alphabetical order.
So, answer should be ‘HGF’.

So, in the series next word is ‘QR.

Explanation:
Alternate letters with their assigned numbers. So, answer is L12.

Explanation:
Each group next letter is forwarding 5th letter.
So, answer is ‘EJO’.