Question 2.
How is the transport system helpful to the farmers in your area.
Answer:

Question 3.
Define child labour? Write any two causes of child labour.
Answer:
Child labour:
The employment of children in an industry or business, especially when illegal or considered exploitative. (OR)
Child labour:
Child labour refers to making Children work so that they are unable to attend schools and perform other childhood activities.
Causes of Child labour:

Question 4.
‘Transport System is important in the development of a country.” Write your opinion in your own words about this statement.
Answer:
The transport system is important for country progress and this transport is added high speed and efficiency to the country progress.
It has good physical connectivity in the part of an urban area which is important for economic growth.
It provides proper tourism transportation in a proper manner on the other hand industrialization is well exceed according to the transportation.

Question 5.
Krishna and Ibrahim study in a school in the same class. They live in different places but the distance from their house to school is three kilometres. Ibrahim comes to school on the city bus whereas Krishna travels by school bus. What could be reasons for families of these students to travel by different bus services?
Answer:
Krishna’s family is a rich or higher middle-class family whereas Ibrahim’s family is a lower middle class or poor family.

Question 7.
Observe the pictures and answer the questions. 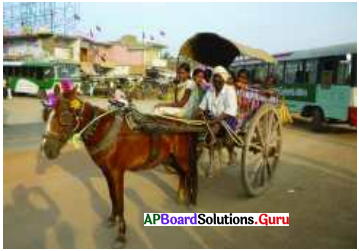 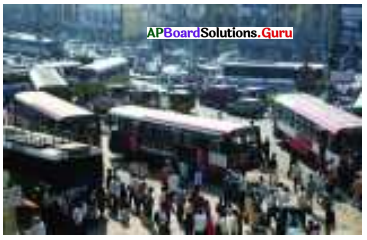 a. What is the difference between these two vehicles?
Answer:

b. How many wheels are there for the cart?
Answer:
There are two wheels.

c. Through which states do the NH7 run?
Answer:
National Highway No.7 (or 44) runs through Uttar Pradesh, Madhya Pradesh, Maharashtra, Telangana, Andhra Pradesh, Karnataka and Tamilnadu.