→ In India we have the government at two levels.

→ One is at the centre and the other is at the state.

→ The state government is responsible for the governance of the people of the state.

→ Every state in India have a Governor.

→ The State Legislative Assembly is a legislative body.

→ Generally, elections to the State Legislative Assembly are held once in every five years.

→ After the General Elections, the leader of the majority party or coalition of parties, is invited by the Governor to form the government.

→ The Upper House of the state legislature is called the Legislative Council or Vidhana Parishad.

→ The Governor is the Constitutional head of a state.

→ The Lower House of the state legislature is called the Legislative Assembly or Vidhana Sabha.

→ The Chief Minister is the actual executive authority.

→ Judiciary is one of the three organs of the state government.

→ The High Court is the highest judicial organ at the state level.

→ The District Collector is the head of the district administration.

→ Legislature, Executive and Judiciary are considered as three estates and Media as the fourth estate.

→ Legislature : A legislature is a governing Ipody that makes laws and can also amend or repeal them.

→ Executive : The executive is the branch of government that is responsible for the day-to-day management of the state.

→ Judiciary : the judicial authorities of a country

→ District level Administration : The management of the tasks of government as it lies within an area legally recognised as a district.

→ Constituency : A particular area from which all the voters living there choose their representatives.

→ Gazette : An official publication for the purpose of notifying the actions and decisions of the Government.

→ Summons : The process of calling all members of the house.

→ Prorogue : Termination of a session of the house.

→ Bureaucracy : A government that is administered primarily by authorities that are staffed with non-elective officials.

→ Survey Stones : A boundary stone is a robust physical marker that identifies the start of land boundary.

→ Coalition : A group formed with two or more people or political parties for a common purpose.

→ Manifesto : A public declaration of policy and aims, specially issued before an election by a political party. 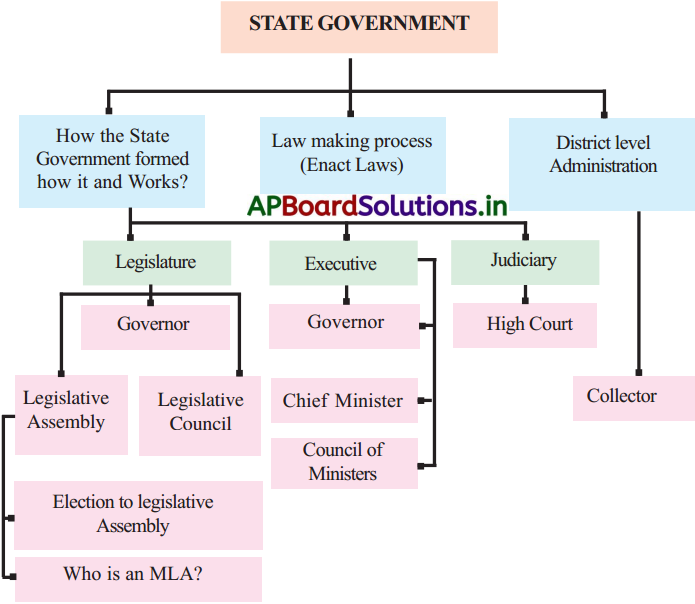