→ Red Fort was built by Shahjahan.

→ The Rise of the Mughals has brought a great change in medieval Indian History.

→ Babur established Mughal Empire after during Ibrahim Lodi the last ruler of Delhi Sultanate at Panipat in 1526 CE.

→ Babur’s son Humayun came to throne after Babur, but Humayun’s brothers did not help him at the right time.

→ Shershah Sur was an Afghan leader.

→ Shershah was not only a great warrior but also an administrator.

→ Many Rajputs surrendered to Akbar and married of their daughters.

→ Salim the successor of Akbar came to the throne with the title Jahangir.

→ Shajahan’s period was much known for the construction of buildings.

→ Aurangzeb was a devout Muslim and led his life as per the principles of Quran.

→ The Mughals had a centralised administration.

→ Akbar introduced the Mansabdari system in his military policy.

→ The Mughals were responsible for building an extensive road system, creation of uniform currency, and the unification of the country.

→ The textile industry developed in the Mughal Empire.

→ A new tradition of architecture was started during the Mughal era.

→ Persian language was the dominant and official language of the empire.

→ A new school of art known as miniature painting emerged during the Mughal period.

→ The decline of Mughal Empire started with Shahjahan and ended with Aurangzeb.

→ The contemporary rulers during Mughals were Afghans, Rajputs, Marathas and Bahman kings.

→ Shivaji was the founder of the Maratha kingdom.

→ Though Shivaji was a devout Hindu, he respected other religions.

→ In Shivaji’s administration, to assist him ‘Ashta Pradhans1 are there (Eight Ministers).

→ Political, Social and Economic life
Political life : The Mughals had a centralised administration.

→ Economic life : The Indian Economy prospered under the Mughal Empire.

→ Art and Architecture : A new tradition of architecture was started during the Mughal era.

→ Contemporary Kingdom to Mughal empire : Happening, existing, living or coming into being during the same period of time.

→ Warrior : a brave or experienced soldier or fighter.

→ Regent : a person appointed to administer a state because the monarch is a minor or is absent or incapacitated.

→ Heretic : a person believing in or practicing religious heresy.

→ Guerrilla warfare : a surprise attack of hit and run tactic by a group of soldiers.

→ Agrarian : relating to the ownership and use of farmland. 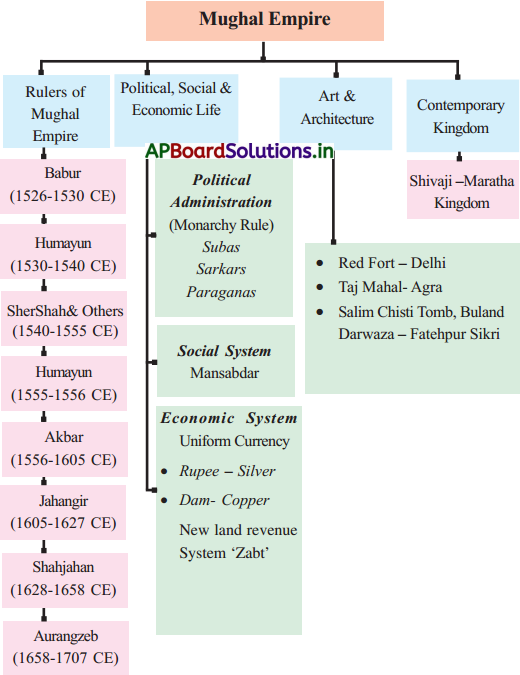