→ A chemical change is a permanent change.

→ Chemical reactions are characterized by one or more of the following characteristics – the evolution of gas, change of color, formation of a precipitate, energy changes, and change of state.

→ A complete chemical equation represents the reactants, products, and their physical state.

→ Reactions in which heat energy is absorbed by the reactants are endothermic reactions.

→ In exothermic reactions, heat energy is released by the reactants.

→ A chemical equation is balanced so that the number of atoms of each type involved in a chemical reaction is the same on the reactant and product sides of the equation.

→ Equations must always be balanced.

→ A combination reaction or synthesis is a reaction in which two or more substances combine to form a single substance.

→ A decomposition reaction is one in which a compound breaks up into two or more substances.

→ In a displacement reaction, one element replaces another element from a compound.

→ In a double decomposition reaction, two compounds react by exchanging their radicals.

→ Oxidation is a reaction involving the addition of oxygen or removal of hydrogen from a substance.

→ Reduction is a reaction involving the addition of hydrogen or the removal of oxygen from a substance.

→ According to the law of conservation of mass, “Mass can neither be created nor destroyed in a chemical reaction”.

→ The chemical equations are balanced to satisfy the law of conservation of mass in chemical reactions.

→ We should never change the formula of an element or a compound to balance an equation.

→ The process of making the number of different types of atoms equal on both sides of an equation is called the balancing of the equation.

→ All the combustion reactions are exothermic reactions.

→ The substance which gets oxidized is the reducing agent.

→ The substance which gets reduced is the oxidizing agent.

→ When fats and oils are oxidized, they become rancid.

→ The precipitate is an insoluble substance.

→ Reactants: The substances which undergo chemical change in the reactions are called reactants.

→ Products: New substances formed in the reaction are called products.

→ Exothermic reaction: Reaction during which heat is released.

→ Endothermic reaction: Reaction in which heat is absorbed.

→ Chemical combination: It is a reaction in which two or more substances combine to form a single substance.

→ Chemical decomposition: It is a reaction in which a compound breaks up into two or more substances.

→ Oxidation: It is a reaction involving the addition of oxygen or removal of hydrogen from a substance.

→ Reduction: It is a reaction involving the addition of hydrogen or removal of oxygen from a substance.

→ Corrosion: Chemical or electrochemical attack the surface of a metal.

→ Rancidity: The condition produced by aerial oxidation of fats and oils in foods marked by unpleasant smell and taste is called rancidity.

→ Chemical equation: A way of denoting a chemical reaction using the symbols for the participating particles (atoms, molecules, ions, etc.).

→ Chemical reaction: A change in which one or more chemical elements or compounds form new compounds.

→ Chemistry: The study of the elements and the compounds they form.

→ Oxidizing agents: Substances that oxidize other substances by providing oxygen to them or removing hydrogen from them.

→ Reducing agents: Substances that reduce other substances by removing oxygen from them or by supplying hydrogen to them.

→ Crystal: A solid in which atoms are arranged in a regular pattern.

→ Tarnish: To make something lose its shine and make it dull because of oxidation or rust.

→ Alloy: A material consisting of two or more metals or a metal and a non-metal. Ex: Steel.

→ Galvanizing: Iron or steel that has been coated with a layer of zinc to protect it from corrosion.

→ Respiration: When we inhale oxygen, it enters our body and combines with glucose in the cells of our body, and releases energy which helps to do the various works. 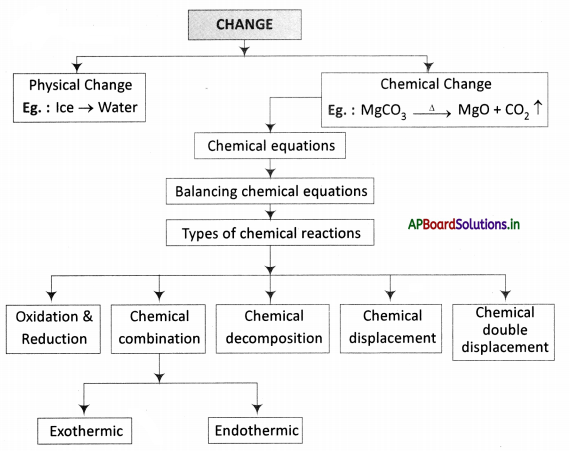