→ The Indian Peninsula was part of Gondwana land.

→ The Himalayan ranges run in the west-east direction in the form of an arch with a distance of about 2400 km.

→ The northernmost range is known as Himadri or Greater Himalayas.

→ The portion of the range found south of the Greater Himalayas is called ’Lesser Himalayas’.

→ The southernmost range of the Himalayas is the Shivaliks.

→ The valleys lying between the Lesser Himalayas and Shivalik ranges are called Duns.

→ The Himalayas are the reason for summer rains and monsoon type of climate in regions that are beyond the Western Ghats of India.

→ The interaction of three Himalayan rivers Indus, Ganga, and the Brahmaputra, and their tributaries resulted in the formation of the great northern plain.

→ In the western part of the great northern plain, the ’Doab’ features dominate the fertile land between the two rivers.

→ The Indian plateau is also known as the peninsular plateau as it is surrounded by the sea on three sides.

→ The peninsular plateau consists of two broad divisions, namely, the central I highlands (Malwa plateau) and the Deccan Plateau.

→ The Western Ghats lie parallel to the west coast and they extend for 1600 km.

→ The Eastern Ghats extend from Mahanadi valley in the north to Nilgiris in the south, The highest peak in the Eastern Ghats is Aroma Konda found at Chintapalli (1680 m) in Andhra Pradesh.

→ The Thar desert is located on the leeward side of Aravalis and receives very little rainfall, ranging from 100 to 150 mm per year.

→ ’Luni’ is the only river in the Thar desert area.

→ The southern part of the peninsular plateau is bordered by narrow coastal strips along the Arabian Sea on the west and the Bay of Bengal on the east.

→ There are two groups of Islands – Andaman and Nicobar Islands stretched in the Bay of Bengal and Lakshadweep Islands in the Arabian Sea.

→ There is a vast diversity in the landforms in which Indian people live.

→ Some areas are irrigated by the mighty rivers flowing from the Himalayas and some by the rainfed rivers from the Western Ghats and its forests.

→ Many places are located in the valleys and others in the mountains.

→ Perennial: LastIng a very long time, or happening repeatedly or all the time

→ Coral reefs: A bank of coral, the top of which can sometimes be seen just above the sea

→ Peninsula: A stretch of land surrounded by water on three sides

→ Angara land: Laurasia = The northerly of the two continents into which the earth’s landmass was once divided

→ Gondwana land: The southerly of the two continents Into which the earth’s landmass was once divided

→ Shivalik: The southernmost range of the Himalayas

→ Purvanchal: The divisions of the Himalayas In Arunachal Pradesh beyond the Dihang valley

→ Duns: The valleys lying between the lesser Himalayas and Shivalik ranges

→ Leeward: The side or direction that Is sheltered from the wind. e.g. by a range of mountains

→ Relief features: The features which exhibit differences in the elevation of any part of the earth’s surface

→ Relief maps: Maps that seek to depict the surface relief of an area in three dimensions though not necessarily to scale

→ WeatherIng: The decay and disintegration of rocks of the earth’s crust by exposure to the atmosphere

→ DeposItion: The laying down of solid material that has been carried from a distant part of earth’s crust by natural agents like a river, wind, etc.

→ Erosion: The process of wearing away of the land surface by various natural agents like water, ice, wind, etc.

→ Landform: The shape, form, and nature of a feature of the earth’s land surface

→ Folding process: The formation of a bend In rock strata due to movements of the earth’s crust

→ Fold mountains: Mountains that have been thrown up into a massive fold or ridge by earth movements

→ Basin: A shallow structural down old In earth’s crust

→ River basin: The area drained by a single river system

→ Topography: A detailed description or representation of both the natural and artificial features of an area Himadri Greater Himalayas = The northernmost range of the Himalayas.

→ Lesser Himalayas: Himachal The portion of the range found south of the Greater Himalayas. 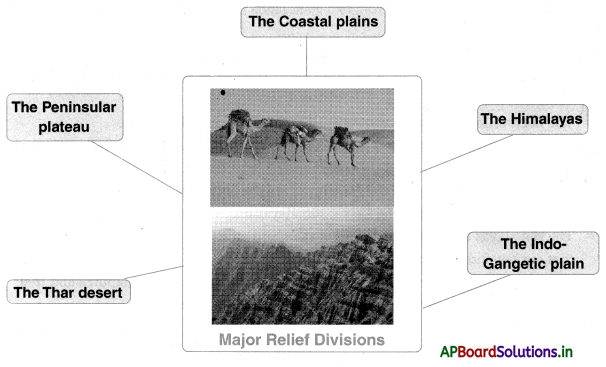 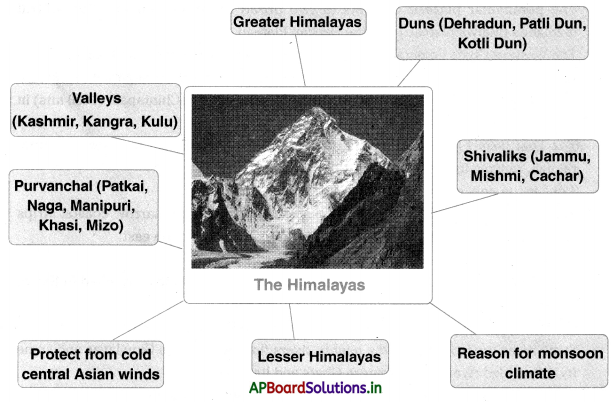