→ Jews were persecuted by Hitler in Germany and several million were killed.

→ Now, the Jewish state of Israel treats its own Muslim and Christian minorities quite badly.

→ In Saudi Arabia, non-Muslims are not allowed to build a temple, church, etc., and nor can they gather in a public place for prayers.

→ The Indian Constitution allows individuals the freedom to live by their religious beliefs and practices as they interpret these.

→ Any form of domination based on religion is in violation of the rights that a democratic society guarantees to each and every citizen irrespective of their religion.

→ Any interference in religion by the state has to be based on the ideals laid out in the Constitution.

→ Fundamental Rights are based on secular principles.

→ Democracy: A system of government by the whole population or all the eligible members of a state, typically through elected representatives.

→ Personal Law: Law that applies to a particular person or class of persons only. Wherever situated – distinguished from territorial law. 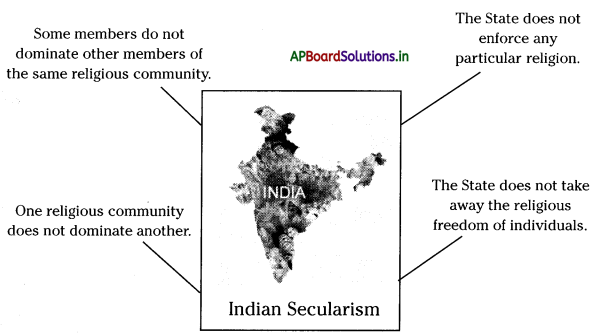