Review of Your Previous Knowledge 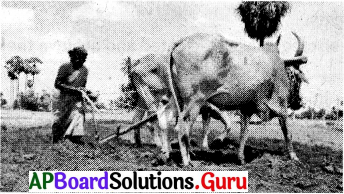 Observe the given pictures and respond to the following questions.

Question 1.
In this lesson you learnt about some inspiring women. Write about the accomplishments of any two women you know.
Answer:
PT USHA :
USHA became the first Indian women to reach the final of an Olympic Event. She is the youngest Indian Sprinter, at 16, to compete in the Olympics at the 1980 Moscow games and won the first medal of the 1982 Asian Games in track and field.

She received the Arjuna Award and Padma Shri Award.

Bachendri Pal:
Indian Mountaineer who in 1984 became the first Indian woman to reach the summit of Mount Everest.

She was received the Padma Shri Award in 1984,

Question 2.
“The stereotypes that men can do anything and woman can only do certain things is an impediment to women’s progress.” Comment.
Answer:
The above statement is not correct. At present stereotype between men and women has been disappearing.

Today women also equally paid and treated along with the men.

If opportunities are provide women can do far better than men in various spheres.
Ex : Sunitha Williams, Smt Indira Gandhi.

Question 3.
Support the notion that woman have the equal capabilities as men by two examples.
Answer:

Question 5.
“Poor girls drop out of school because they are not interested in getting education.” Can you justify this statement?
Answer:
The above statement is not true. There are several reasons behind it.

The main aim of Government of India is to generate awareness and improve the efficiency of welfare services intended for girls in India.

The scheme was launched with an initial funding of 100 crore rupees.

It was launched by our Prime Minister Shri Narendra Modi on 22nd January 2015.

Question 1.
Who perform what?
In your area who is doing the below mentioned professions.

Question 4.
Discuss the reasons why girls dropout of school in your village.
Answer:
The following factors responsible

The present study was undertaken to know the various reasons of school dropouts amongst girls in various areas.

Question 2.
Which of the above tasks do you think men can only do?
Answer:
No, there is no profession that only men can do.

Women can also achieve success in every profession.

Question 3.
Which of the above tasks do you think women can only do?
Answer:
No, there is no profession separate that only can women do.
Men and women are equal in all professions.

Question 4.
Is it fair to assume that women cannot do what men do? Why?
Answer:
No, women can do everything that men can.

If opportunity and support and equal treatment is given to women they can also achieve their goals.

Ex : Seema Rao is the country’s first won Commando trainer. She has trained over 15,000 soldiers in close-quarter battles.

Question 5.
What can be done to overcome these challenges in the family and the community?
Answer:

Question 6.
How women’s rights movements have contributed to the realization of women’s rights?
Answer:
Women have struggled for equality and against oppression for centuries and also some battles have been partly won

Such as the right to vote and equal access to education. Here are some examples :

1. Examples :
During French Revolution form very beginning onwards women revolt for right to vote and equality along with men.

2. North America :
Women’s movement for to go to school.

In the above movements women were successuful to gain right to vote, equality, education fields etc.

So women’s right movements helpful to development of women.

Question 1.
Find out about the ‘Beti Bachao Beti Padhao’ campaign.
Answer:
The key elements of the scheme include Enforcement of PC & PNDT Act, national wide awareness and advocacy campaign and multi – sectoral action in selecting 100 districts in first phase.

There is a strong emphasis on mindset change through training, sansitization, awareness raising and community mobilisation on ground.

Since the launch of Beti Bachao – Beti Padhao, the multi-sectoral District Action Plans have been operationalized in almost all states.

The initiative has received great response.

Observe the below situations:

2. Is the notion that girls cannot travel alone justifiable?
Answer:
No, it is not.

Vinay passed with good marks in tenth class. He told his father that he would join Hotel management course. “That is a course for girls. Why do you choose it? Join course that can be useful to become Engineer or Doctor” Father said.
1. Is it fair to divide the courses taken by female and the courses taken by male? Is there a difference in education on the basis of gender?
Answer:
No. It is not. There is no differene in education on the basis of gender.

Bhavana and Sailaja passed 10th class Bhavana told her parents that she would study well to become a collector. They admitted Bhavana in a reputed college. Sailaja also said the same to her parents. But her parents said that the higher education for women was unnecessary and they would marry her.

1. What do you think is the reason for the differences in the way parents think?
Answer:
Many be because of their financial status.

2. Why the girl was not supported to continue her studies?
Answer:
Because her parents might think that it is a waste of money to spend on girls education. Due to lack of awareness about the importance of girls education.

Question 1.
Prepare a scrap book with prominent women personalities and their achievements.
Answer: