Students can go through AP State Board 7th Class Social Studies Notes Chapter 4 Oceans and Fishing to understand and remember the concept easily.

→ The earth is known as a watery planet as it is the only planet containing water in abundance. & It is estimated that about 71% of the earth’s surface is occupied by seas and oceans.

→ An extension of saline water on earth is called the sea.

→ Oceans are huge bodies of water generally separated by continents.

→ The floor of the ocean is just like the surface of the earth.

→ The bottom of the sea is not a flat surface.lt consists of hills, mountains, plateaus, plains, trenches, etc.

→ The waters of the oceans are never still.

→ Ocean waters have three kinds of movements. They are:

→ The ocean currents are of two types – the warm currents and the cold currents.

→ Tides are the rhythmic rise and fall in the level of the water in the oceans every day.

→ Tides do not rise to the same height every day.

→ Ocean water is always saline. It contains Several mineral salts dissolved in it.

→ The oceans are the main source of rainfall.

→ Oceans are storehouses of fish and other seafood.

→ They are the main source of salts.

→ The fishermen have a special tool kit for repairing the nets which consist of Nulukarralu Nulukanda and a flattened stick that determines the net ring size.

→ The village soil is mainly loamy and rice is the principal crop grown on it.

→ A large number of people of Bhavanapadu worship Gangamma, Gowri, and Shiva

→ Tool kit: The fishermen have a special tool kit for repairing the nets which consist of Nulukarralu (net repairing fork) N.ilukanda (thread) and a flattened stick that determines the net ring size.

→ Kannulu: Nets are of different types based on different sizes of the Kannulu, (Rings) and layers of the net.

→ Burra Katha: There is an open stage where the Burra Katha is performed There are three members on the stage One among them tells a story, others follow him by imitating It is a famous technique

→ Mechanical Boat: Compared to the Karrateppa there is far more risk of life in Marapadava (Mechanicál boat) because it goes far into the sea.

→ Waves: When the water on the surface of the ocean rises and falls they are called waves.

→ Currents: In the oceans, water is found to move from one part to another in big streams.

→ Tides: Tides are the rhythmic rise and fall of the water in the oceans every day

→ Warm currents: The warm currents flow from the equatorial region towards the poles

→ Cold current: The cold currents flow from the poles towards the equatorial regions.

→ Karrateppa: It is a country-made boat which goes up to 5 km into the sea and brings small catches of fish.

→ Marapadava: It goes far into the sea and it is difficult to swim over to shore in times of trouble. 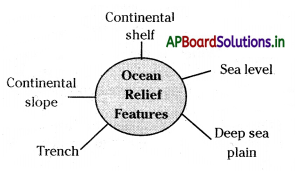