→ From 1500 AD to 1800 AD trade between countries in America, Europe, Africa, and Asia increased manifold.

→ In about 1750, machines and steam power began to be increasingly used to produce goods, to move goods and people from one place to another.

→ This was the beginning of the ‘machine age’ in Britain.

→ James Watt was an English craftsman who invented machines.

→ Production was now carried on in a place called ‘factory’.

→ All facilities for production were owned and managed by individuals called capitalists.

→ In the 19th century, the industrial workers of Europe had to face several hardships.

→ Major changes swept industries with the coming of machines.

→ Energy is needed to run machines in a factory. Energy is available from coal, electricity, petroleum, and so on.

→ The invention of the steam engine boosted the shipping industry. It also reduced the cost of transportation by one-third of the cost of road transport.

→ George Stephenson’s locomotive pulled heavy loads along a 64-kilometer track from Liverpool to Manchester at a speed of 46 kilometers per hour.

→ In the early 20th Century, aircraft was developed by Wright Brothers and today, air transport is a major means of transport.

→ The industrial revolution led to a gradual shift of people from villages to towns.

→ Slums became a common scenario in towns and cities, especially near the factories and mines. ,

→ Slowly people fought for civil rights and the conditions of the worker’s quarters also improved.

→ Revolution: It is an attempt, by a large ñumber of people, to change the government f a country, especially by violent action. Eg: A socialist Revolution, Industrial revolution

→ Production:: The quantity óf goods that are produced. Machines became important in place of minor tools and handlooms. They produced goods on a large scales

→ Factory: During 1750 – 1800, a new system called the ‘factory system’ emerged In the p1ace of simple tools and manual power, new machines and steam power came to be increasingly used Production was now carried on in a place called factory.

→ Organization: A group of people who work together in a structured way for a shared purpose.

→ Nuclear Energy: A powerful form of energy produced by converting matter into energy splitting the nuclei (centra) parts) of atoms, It Is used to produce electricity.

→ Urbanization: Expartson of town and cities.

→ Slums: A rundown re of a city or town inhabited by very poor people

→ Capitalists: All facilities for production were owned and managed by Individuals calledcapita1ists

→ Colonies: Colonies are those countries whose resources are used for the benefit of another country.

→ Manufactories: The traders brought together the craftspersons under one roof so that they did not have to go to each one’s home or explain their requirements to each person They set up small workshops called manufactories

→ ProtoindustrlaIjsago; The craftsmen brought their own tools and worked with raw materials given by the trader The trader then took the product and sold ¡tin the market. In this way slowly the control of the trader over the craftspersons increased. This phase is called ‘Proto- industrialization’

→ Machines: Major changes swept industries with the coming of machines. Machines could be worked by even unskilled persons. Thus skilled artisans were no longer required In their place a large number of women and children were employed and made to work for meager wages. 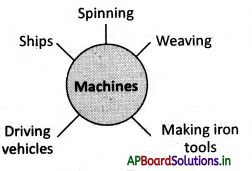