Students can go through AP State Board 6th Class Social Studies Notes Chapter 1 Our Earth in the Solar System to understand and remember the concept easily.

→ The Sun, the Moon, and all those objects shining in the night sky are called celestial bodies.

→ The celestial bodies which have their own heat and light are called Stars.

→ The celestial bodies which do not have their own heat or light and or lit by the light of the other stars are called Planets.

→ Satellites and some other celestial bodies known as asteroids and meteoroids form the Solar system.

→ There are eight planets in our Solar system. They are Mercury, Venus, Earth, Mars; Jupiter, Saturn, Uranus, and Neptune

→ Jupiter is the biggest and Mercury is the smallest planet.

→ Our home planet Earth is the third nearest planet to the Sun.

→ The shape of the Earth is described as Geoid. Geoid means an Earth-like shape.

→ Earth is called a Blue planet because two-thirds of its surface is covered by water.

→ The Earth is the most suitable planet to support life.

→ There are four spheres of Earth. Lithosphere, Hydrosphere, Atmosphere, and Biosphere.

→ Our Earth has only one natural satellite, that is, the Moon.

→ A man-made Satellite is an artificial body. It is designed by scientists to gather information about the universe, Earth, or for communication purposes.

→ Irregularly shaped rocks between Mars and Jupiter are called Asteroids. ,

→ Meteoroids are small rocky or metallic bodies in outer space,

→ A Comet is a celestial object made up of a head and a tail.

→ A cluster of millions of stars is called a Galaxy.

→ Some millions of Galaxies make the Universe.

→ Galaxy: The cluster of stars

→ Satellites: Celestial bodies that move around the planets.

→ Orbit: The path in which the planets move around the sun

→ Biosphere: Plants and animal life on the earth.

→ Comets: A comet is a celestial object made up of a head and a tail.

→ Planet: A celestial body moving in an elliptical orbit around a star 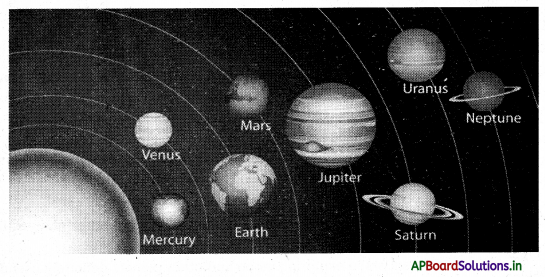