Students can go through AP State Board 8th Class Physical Science Notes Chapter 11 Some Natural Phenomena to understand and remember the concept easily.

→ Some objects can be charged by rubbing with other objects.

→ There are two kinds of charges – positive charge and negative charge,

→ The electrical charges produced by rubbing are called static charges.

→ When charges move, they constitute an electric current.

→ An electroscope may be used to detect whether a body is charged or not.

→ Attraction is not a sure test to know the presence of charge on a body.

→ The process of transfer of charge from a charged objects to the earth is called earthing.

→ The process of an electric discharge between clouds and earth or between different clouds causes lightning.

→ A lightning strike could destroy life and property.

→ Lightning conductors can protect from the effects of lightning.

→ An earthquake is a sudden shaking or trembling of the earth.

→ Earthquake is caused due to the disturbance deep inside the earth’s crust.

→ It is not possible to predict the occurrence of an earthquake, as Earthquakes tend to occur at the boundaries of the earth’s plates. The boundaries are known as fault zones.

→ We should take necessary precautions to protect ourselves from earthquakes.

→ Crust: The outermost layer of the earth is called the crust

→ Discharge: The process where the flow of charge takes place between negative and positive charges which produce streaks of bright light and sound is called discharge.

→ Earth’s plate: The outermost layer of the earth is not in one piece. It is fragmented. Each fragment is called an opiate.

→ Electroscope: An earthquake is a sudden, shaking or trembling of the earth

→ Lightning: An electroscope is a device used to detect whether a body is charged or not.

→ Negative charge: When a glass rod is rubbed with a silk cloth by sign convention the charge acquired by sick cloth is taken as a negative charge.

→ Positive charge: When the glass rod is rubbed with Silk cloth buying convention the charge acquired by gloss rod is is taken as positive.

→ Seismograph: The seismic waves are recorded by an instrument called the seismograph.

→ Thunder: A loud rumbling or crashing noise heard after a lightning flash due to the expansion of rapidly heated air.

→ Thunderstorm: The swift movement of the foiling droplets along with the rising air creates lightning and sound. This event has coiled a thunderstorm.

→ Transfer of charge: The movement of charge from one place to another place is the coiled transfer of chore.

→ Tsunami: A tidal wave caused by an earthquake or other disturbance.

→ Earthing: The process of transfer of charge from a charged object to the earth is coiled earthing. 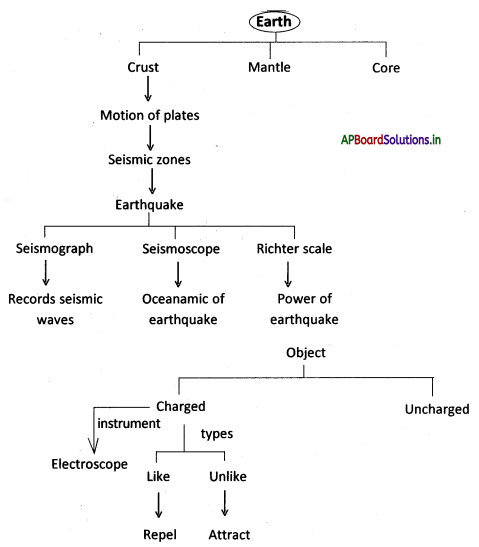