→ Friction opposes the relative motion between two surfaces in contact. It acts on both surfaces.

→ Friction depends on the nature of the surface in contact.

→ For a given pair of surfaces, friction depends upon the state of smoothness of those surfaces.

→ Friction depends on how hard the two surfaces pressed together which is a normal force acting on the body.

→ Static friction comes into play when we try to move an object at rest relative to another surface or object.

→ Sliding friction comes into play when an object is sliding over another.

→ Friction is important for many of our activities.

→ Friction can be increased by making a surface rough.

→ The sole of the shoes and the tires of the vehicles are threaded to increase friction.

→ Friction can be reduced by using lubricants.

→ In many machines, friction is reduced by using ball bearings.

→ Fluid friction can be minimized by giving a suitable shape to bodies moving in fluids.

→ Friction: The force which opposes the relative motion of two surfaces of bodies that are in contact.

→ Static friction: The friction which comes into play when surfaces of the objects are at rest relative to each other.

→ Lubricants: The substances which reduce friction are called lubricants.

→ Ball bearings: The devices which reduce friction between rotating shafts of machine tools.

→ Drag: The frictional force exerted by fluids is called drag. 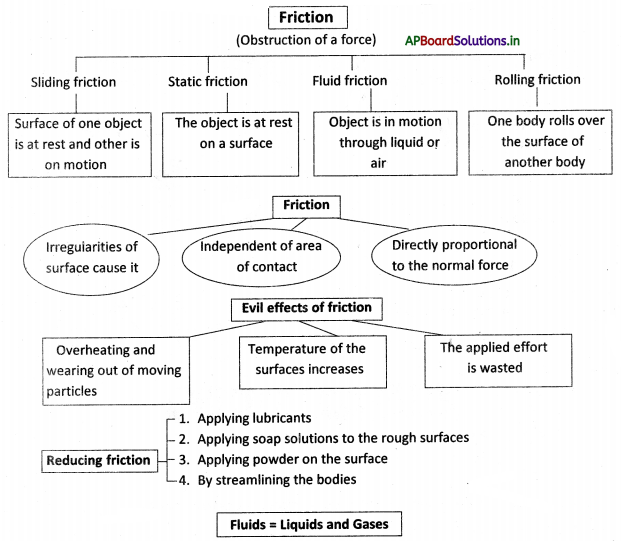