→ Hyderabad was an important princely state of South India under British paramountcy.

→ It was ruled by the Nizams who were initially, provincial governors of the Mughal emperors.

→ Mullah Abdul Qayyum of Hyderabad became a great champion of the Congress.

→ In the year 1892 Arya Samaj was established in Hyderabad, which has credited many leaders to the nationalist movement in Hyderabad.

→ The Nizams actually discouraged the setting up of private Telugu medium schools.

→ In 1924 Madapati Hanumantha Rao and others formed the Andhra Jana Sangham.

→ The leaders of various sections decided to unite into one large organization and thus AMS was formed in 1930.

→ Later the radical elements gained leadership and a new movement of the peasants
started.

→ Enthused by the response of the youth of the state, the nationalists of Hyderabad had set up the Hyderabad State Congress in 1938.

→ in 1942 they started Satyagraha in tune with the National Quit India Movement.

→ The movement was transformed in 1947-48 into a broad anti-Nizam and anti-feudal struggle demanding the merging of Hyderabad with independent India.

→ The fanatic Muslim enthusiasts formed Ittehadul Muslimeen, an organization to protect the Muslim domination of Hyderabad state and Nizam rule.

→ Hyderabad was finally integrated into Indian Union in September 1948.

→ Vettel: Making some people work for no wages (slavery)

→ Subordinate kings: The kings under an emperor or a Samrat, enjoying liberty by paying some annual tribute

→ Legitimate rights: Rights that are guaranteed by law

→ Guerrilla squad: A group of armed people who attack all of a sudden

→ Representative Government: A government that is run by the elected or nominated members 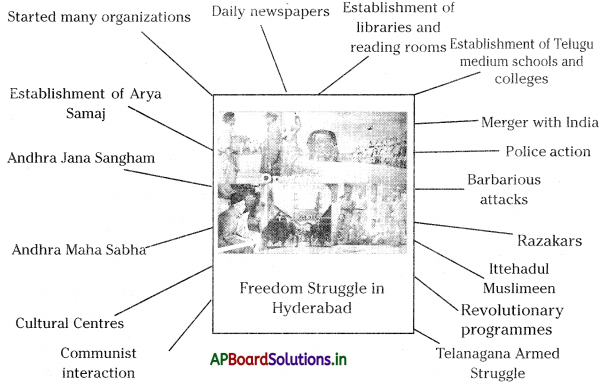