Question 1.
Even after the ‘Prohibition of child marriage Act1, child marriages are still going on here and there. Suggest some measures to stop this dogma. (SA-III : 2016-17)
Answer:

Question 1.
What are children rights?
Answer:

Question 2.
What are the forms of domestic violence?
Answer:
Forms of Domestic Violence :

Question 3.
Write some of the important features of the ordinance on ‘Sexual Assault and Torturing.
Answer:

Question 4.
Who are eligible for judicial assistance?
Answer: 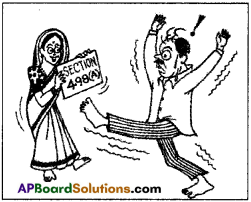 Answer:
They both are couple. The man is angry and ready to kick his wife. She is cheerful and warning him with the section 498 A of I PC.
Note: Section 498 A of IPC, 1860: Husband or relative of husband of women subjecting her to cruelty – whoever beingthe husband orthe relative ofthe husband of a woman, subjects such woman to cruelty shall be punished with the imprisonment for a term which may extend to three years and shall also be liable to fine.

Question 7.
What about the Immoral Trafficking Act (1956) and amendment 2006? What are the different forms of trafficking?
Answer:
The Immoral Trafficking (Prevention) Act 1956 and amendment 2006 :
Girls and women are being lured in the name of providing jobs, bright future, offering roles in cinema etc., and take them to towns and cities and sell them for prostitution. Even they beat and, cause physical violence to make them obey. Certain times they remove body parts.

Trafficking and selling of them for prostitution or encouraging them to enter into prostitution is a punishable crime. Though they come on their will and interest is also treated a crime.

Activities against the law

Labourers
1. Vetti :
Taking work without making proper payments, not providing nutrious food, clothes and even not treat them as human beings.

3. Agriculture Labour:
Involving in the agriculture work and exploiting them for more physical work.

4. Construction work :
Labour involved in construction of buildings, roads, etc. with nominal payments and providing them with substandard food.

Question 8.
Read the following passage and answer the given questions.
Lok Adalat means people’s court. All are equal before law. The Article 39-A of the Constitution of India, contains various provisions for settlement of disputes through Lok Adalat. It is an Act to constitute legal services authorities to provide free and competent legal services to the weaker sections of the society. It is to ensure that opportunities for securing justice are not denied to any citizen by reason of economic or other disabilities. And to organize Lok Adalats to secure that the operation of the legal system promotes justice on a basis of equal opportunity.

In addition to above, an Act was formulated which is called “Act of Judicial Services Authority.” This is a central law. The State government and High Court jointly formulated certain principles as per this Act.
1) What is Lok Adalat?
Answer:
It is people’s court.

3) To whom does it help?
Answer:
It helps the weaker sections of the society.

4) What is the name of the Act?
Answer:
Act of Judicial Services Authority

Question 9.
Read the following passage and answer the given questions.

1) What is punishment mentioned here?
Answer:
Five years of imprisonment and a fine.

2) What is observed?
Answer:
It is observed that after the marriage the bride is teased, scolded, abused, beaten and sometimes killed or forced to commit suicide.

3) What are all these called?
Answer:
These are all called ‘Offences’.

4) What is the law for offerings? (Write any two)
Answer:
1) Enlisting the offerings
2) Offerings cannot be demanded.

Reality:
Domestic violence starts slowly and it becomes a routine, if nobody opposes it. The victims certain times are hospitalised for treatment and even lose their life and it adversely affects their dignity and self-respect.

Misconception :
Addiction to the drinking is the major cause for violence.

Reality :
The alcoholism for domestic violence is only an assumption but the statistics reveals that 40% of the men who beat their wives are not addicted to alcoholism.

Misconception :
Women shall bear the violence for the sake of children.

Reality :
Violence leads to more and more violence. Children that grow in the violent atmosphere will become more violent in future.

Misconception :
There is no way to get out of domestic violence.

Reality :
The violence free environment is the birth right of every woman. The Women Protecting Acts and laws are available and one should take their support.