Question 1.
How did you get the characters from your parents and grandparents?
Answer:
By Genes

Question 2.
Why man is called a moving museum of vestigial organs?
Answer:

Question 3.
Observe the given Flow-chart and answer the question.

Question 4.
What examples you will give to prove that Lamarckism is not correct?
Answer:
August Weismann, tested the theory proposed by Lamarck by experiments on rats. He removed tails of parental rats. He observed for twenty two generations but still off springs are normal with tails.

Question 5.
Which chromosomes determine the sex in human beings?
Answer:
Allosomes or Sex chromosomes. They are xx (girls) and xy (boys).

Question 6.
Why do we call appendix as a vestigial organ?
Answer:

Question 7.
What are variations?
Answer:
Differences in characters within very closely related groups of organisms are referred to as variations.

Question 9.
Why Mendel has chosen garden pea plant as material for his experiments?
Answer:
Pea plant has following advantages.

Question 11.
What is F3 generation?
Answer:
F3 generation represents the offsprings produced from the individuals of F2 generation.

Question 12.
What is a factor?
Answer:
The determining agent responsible for each trait is called a factor.

Question 13.
WTiat is law of dominance?
Answer:
According to Mendel, among a pair of alleles for a character, only one expresses itself in the first generation as one of the allele is dominant over the other. This is known as law of dominance.

Question 18.
What are genes?
Answer:
Genes are the factors which are responsible for characters or traits of an organism. These are the units of heredity that are transferred from a parent to offspring. These are small segments of DNA on a chromosome.

Question 19.
What is an allele?
Answer:
The pair of genes which are responsible for character is called allele.

Question 20.
What are homozygous alleles?
Answer:
If an organism has two copies of the same allele for example TT or tt it is homozygous for that trait.

Question 21.
What are heterozygous allele?
Answer:
If an organism has one copy of two different alleles for example Tt, then it is heterozygous.

Question 23.
Wliat is the law of segregation?
Answer:
The law of segregation states that every individual possesses a pair of alleles for any particular trait and that each parent passes a randomly selected copy of only one of these to its offspring.

Question 25.
What is heredity?
Answer:
The process of acquiring characters or traits from parents is called heredity.

Question 26.
What is inheritance?
Answer:
The process in which traits are passed from one generation to another generation is called inheritance.

Question 27.
What is genetic drift?
Answer:
Change in the frequency of genes in small populations is called genetic drift.

Question 35.
What are autosomes?
Answer:
Chromosomes whose number and morophology do not differ between males and females of a species are called autosomes.

Question 36.
What are allosomes?
Answer:
The chromosomes that determine sex of the organism are called allosomes.

Question 40.
What are analogous organs?
Answer:
The organs which have similar appearance and functions but have different structure and origin. Ex : Wings of a butterfly, bat and a bird.

Question 41.
What is embryology?
Answer:
Embryology is the study of the development of an organism from egg to adult stage.

Question 47.
What is human evolution?
Answer:
Human evolution is the evolutionary process leading upto the appearance of modern human beings.

Question 58.
What is the evolutionary significance of the fossil archaeopteryx?
Answer:
Archaeopteryx serves as a connecting link between birds and reptiles. It is the fossil evidence to show that birds have evolved from reptiles.

Question 60.
Define evolution.
Answer:
Evolution is the sequence of gradual changes which takes place in the primitive organisms over millions of years in which new species are produced.

Question 1.
Write Phenotypic and Genotypic ratio of table given at side.

Question 2.
Define and explain Variations with examples.
Answer:
Variations: Differences in characters within very closely related groups of organisms are referred to as variations.
(OR)
Differences among living beings are called variations.
Ex:

Question 3.
“Human being is said to be a moving museum of vestigial organs”. How can you support this statement?
Answer:

Question 4.
Fill the given table and write the genotypic ratio basing on table. 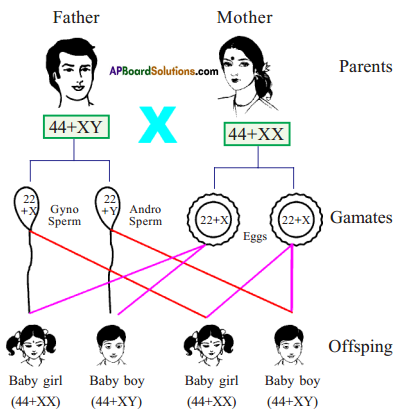 Question 6.
Define the terms phenotype and genotype.
Answer:
Phenotype: The observable properties of an organism that are produced by the interaction of the genotype and the environment. These characters can be seen.
Genotype: The genotype is the genetic make-up an individual usually with reference to a specific characteristic consideration.

Question 7.
What questions you will ask a palaeontologist about fossils?
Answer:

Question 8.
How does the embryological evidences support that Evolution has taken place?
Answer:
Evidences:

Question 9.
Observe the checker board and answer the following questions.

Question 10.
What happens if there is no evolution?
Answer:

Question 12.
If you meet a historian to clarify your doubt on ‘Man has first born in African conti¬nent’, what type of questions will you ask him / her?
Answer:

Question 13.
What is the difference between Phenotype and Genotype?
Answer:

Question 14.
What are the differences between homozygous and heterozygous ?
Answer:

Question 15.
How do traits get expressed according to Mendel?
Answer:

Question 16.
What is speciation? How it occurs?
Answer:

Question 18.
Write a short notes on the law of “inheritance of acquired characters”.
Answer:

Question 19.
Write a short notes on the theory of “Natural selection”.
Answer:

Question 20.
Write briefly about “Survival of the fittest”.
Answer:

Question 23.
What are fossils? Write a short note on their formation.
Answer:

Question 24.
How would you appreciate Jean Baptist Lamarck for his contribution to the biology?
Answer:

Question 25.
How did August Weisemann disprove the theory of “Inheritance of acquired characters” proposed by Lamarck? (OR)
What example will you give to prove that Lamarckism is not correct?
Answer:

Question 26.
Some organisms or species adapt better and survive in a community of organisms. Why do you think this may happen?
Answer:

Question 27.
What do you understand about pure breeds?
Answer:

Question 28.
What do you understand about F1 generation?
Answer:

Question 29.
What are the differences between F1 generation and F2 generation of mono hybrid cross?
Answer:

Question 30.
What are the differences between monohybrid cross and dihybrid cross ?
Answer:

Question 1.
Fossils are the precious evidences preserved by the nature to help us knowing about ancient life forms. Write the information you collected about fossils.
Answer: 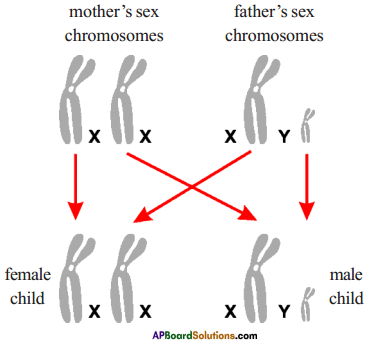 Answer:
a) Female
b) Father
c) Not correct
d) No, some variations occur.

Question 3.
Observe the diagram and answer the following questions. Vamsi and Priya are newly married couple. They want to give birth to a male child. 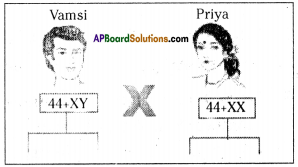 a) Draw a probable diagram showing transfer of chromosomes from parents to give birth to male child.
Answer: 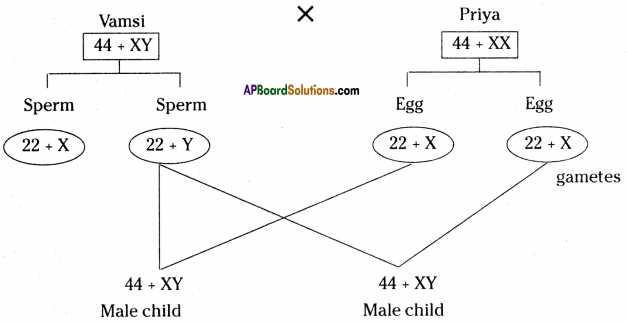 i) What does the given flow chart indicate?
Answer:
Sex determination in human beings

ii) What will happen if the sperm containing ‘X’ chromosomes fertilises the ovum?
Answer:
Baby will be a girl

iii) Who decides the sex of the baby – Mother or Father?
Answer:
Father

iv) How many pairs of chromosomes are present in off-spring?
Answer:
23 pairs

Question 5.
Write a brief note on Homologous and Analogous organs.
Answer:
Homologous organs: Organs which are structurally similar but functionally different are known as “Homologous organs”.
Forelimbs of a whale – swimming
Wings of a bat – flying
Forelegs of cheetah – running

Analogous: Organs which are structurally different but functionally similar are known as “Analogous organs”.
Eg : Wings of a bird – flying
Wings of a bat – flying

Question 6.
Observe the flow – chart and answer the following. 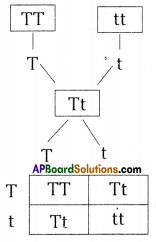 iv) What laws of inheritance did you understand by this flow – chart?
Answer:
understand that i) the law of dominance ii) law of segregation proposed by Mendel.

Question 7.
Write the Darwin’s theory of evolution in a nutshell.
Answer:

Mendel has chosen garden pea as material for his experiment because:

Question 9.
What is Phenotype and Genotype? Explain them with the help of Mendel’s Monohybrid cross.
Answer:
Phenotype: Expression of visible character of an individual is called phenotype.
Genotype: Genetic constitution of an individual for any character is called Genotype or Probable nature of factors is known as genotype.
Cross Pollinating a pure breed of yellow coloured pea seeds (YY) and green coloured pea seeds (yy) give F1 generation. All pea seeds were yellow in F1 generation. So, yellow colour is phenotype. ‘Yy’ is genotype of all pea seeds in F1 generation.

I. Homologous and analogous organs :

Question 11.
Observe the given flow-chart and answer the following questions:

i) Name the chromosomes that determine the sex of an individual.
Answer:
Y Chromosome of father.

ii) Show given information in the form of Checker Board.
Answer: 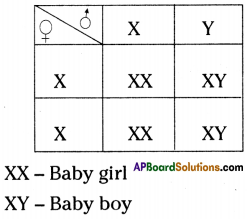 iii) In this situation, which principle of Mendel is applicable?
Answer:
Law of dominance

iv) “Mother determines the sex of the baby”. Is this statement correct or not? Why?
Answer:
The statement is not correct. Because the sperm of father that carries Y chromosome fertilize with ovum of mother that contains X chromosome the resultant will be XY – Male baby.

Question 12.
Keep in mind Mendel’s experiments and write what you know about the following concepts?
a) Pure breed b) Phenotype c) Genotype d) Alleles
Answer:
a) Pure breed: These are the plants that expresses a selected character over several generations. Such plants according to Mendel were pure breed for that character.

b) Phenotype: The characters which can be seen is known as phenotype. We cannot determine the internal factors by phenotype. It tells about only the dominating char-acters which express externally. The phenotype ratio in monohybrid cross is 3 : 1.

c) Genotype: The genetic make up of an individual is known as genotype. Genotype itself is the indication of internal factors. It tells about both dominant and recessive characters present within. The genotype ratio in monohybrid cross is 1 : 2: 1.

d) Alleles: Alleles are corresponding pairs of genes located at specific positions in chromosomes. Together they determine the genotype of their host organism. Every individual possesses a pair of alleles for any particular trait and that each parent passes a rondomly selected copy of only one of these to an offspring. The offspring then receives its own pair of alleles for that trait one each from both parents.

Question 13.
Competition among organisms, variations, natural selection survival of the fittest.
Which theory explains all these aspects? Describe them in a orderly manner.
Answer:

Question 14.
What is genetic drift? Explain how it provides diversity in the population.
Answer:

His assumptions made to explain his observations are:
Assumption 1: Every pea plant has two ‘factors’ which are responsible for producing a particular property or trait.
Assumption 2: During reproduction one ‘factor’ from each parent is taken to form a new pair in the progeny.
Assumption 3: One of these will always dominate the other if mixed together.

Laws made from his experiments: