Question 1.
Draw a table with the following items and summarise various examples in the context of migrant laborers. 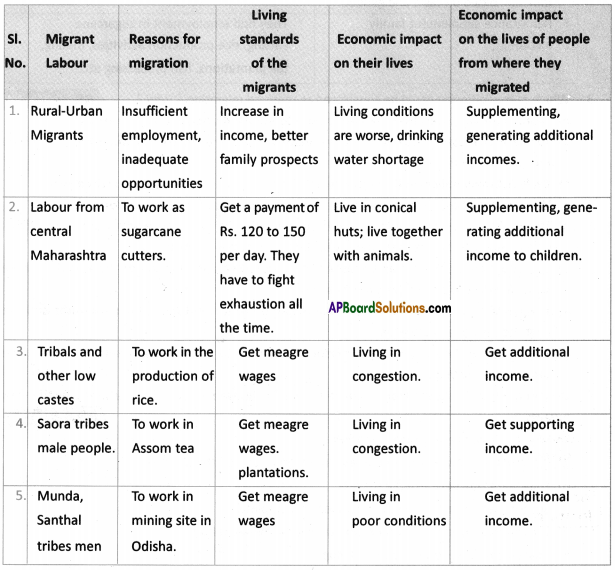 Question 2.
Compare and contrast the migration from rural to urban areas and rural to rural areas.
Answer:

Question 3.
Which of the following could be considered as seasonal migration? Why?

Question 4.
Do you think migrants are trouble makers/trouble shooters in their destinations? Justify your answer.
Answer:

Question 5.
The following are migrants of different types. Classify th into internal and international migrants.
a) People going from India to Saudi Arabia to work as technicians
b) Agricultural labourers going from Bihar to Punjab
c) Brick workers going from Odisha to Andhra Pradesh
d) Teachers going from China to India to teach Chinese to Indian children
Answer:

Question 6.
‘Most children of migrant families become dropouts.’ Do you agree with this statement? Justify your answer.

Question 8.
Why are only professionals able to go to developed countries? Why cannot unskilled workers migrate to these countries?
Answer:

Question 9.
Why are only unskilled workers from India wanted in West Asian countries?
Answer:

Question 10.
Why are workers from three states able to go to a considerable extent to work in West Asia?
Answer: 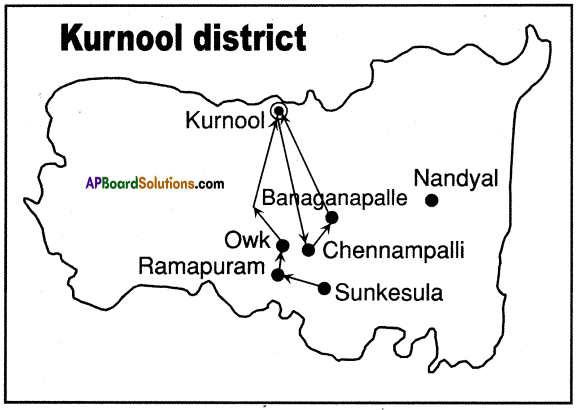 Question 2.
Here is a list of a few people. Categorise them as migrant or non-migrant. Indicate the pattern and guess the probable reasons for migration. 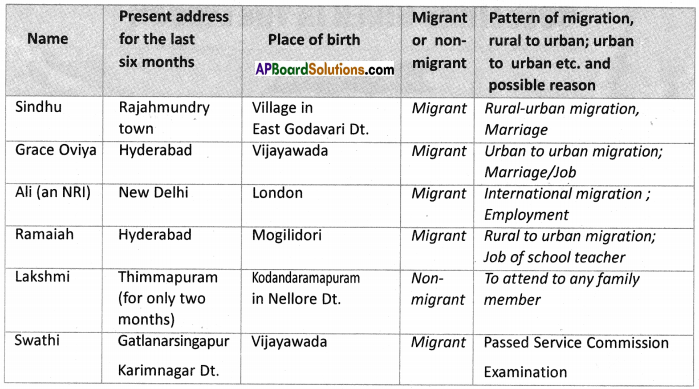 Question 3.
Read the following table and complete the required information. 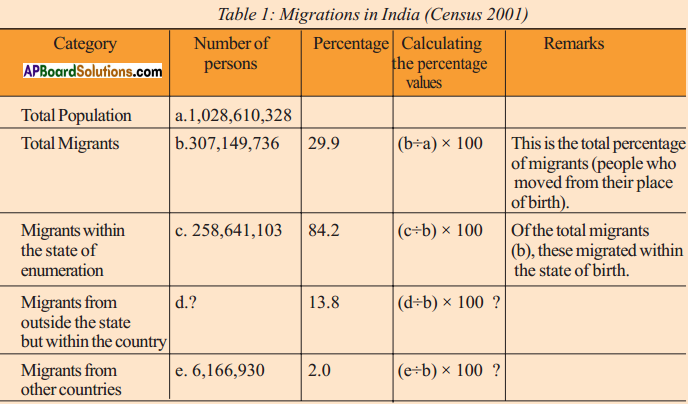 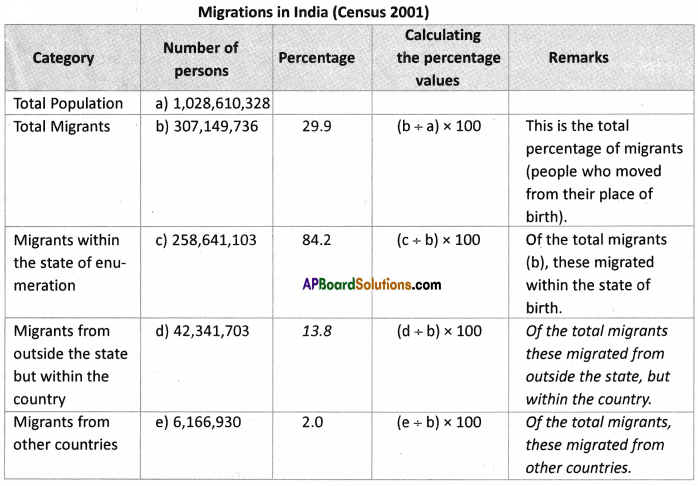 Question 4.
In the following map, what are the states from which migrant come to Delhi ? 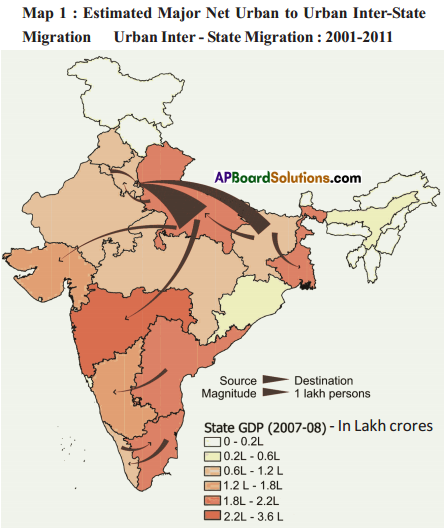 Question 5.
In the following map, form which states do the people migrate to Andhra Pradesh and Karnataka? 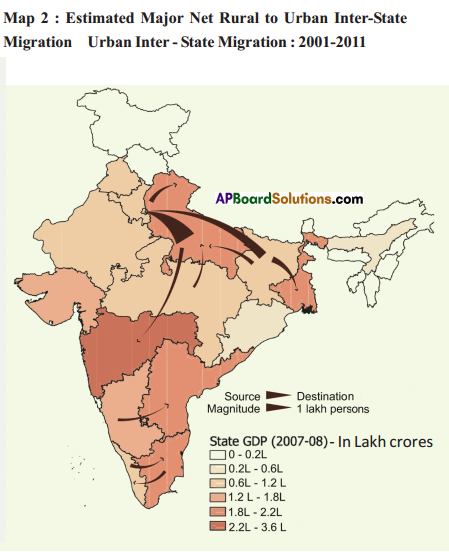 Question 6.
In the following map, look at Tamil Nadu, what could be reasons out-migration and in migration? 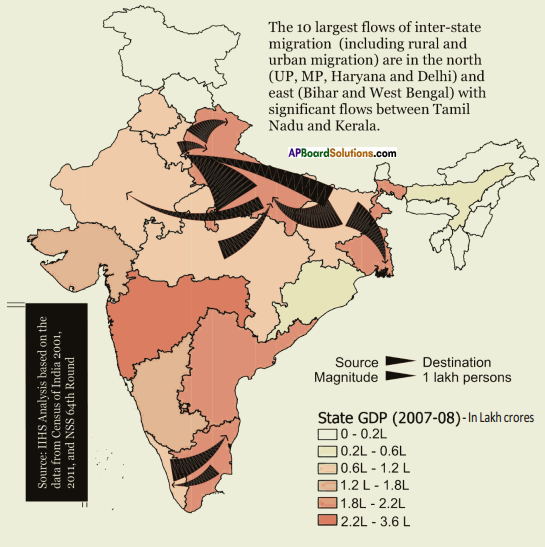 Question 7.
Interview a person who has come to a town to work in the unorganized sector as a labourer or domestic servant and write her story (see the case study of Ramaiah).
Answer:
Seethamma – a domestic helper in Bengaluru.
I hail from Pedavadlapudi village, Mangalagiri Mandal, Guntur District. I am 56 years old. We have two male children. Both of them are married off. My husband used to pull rickshaw. But his untimely death, a few years ago made my life miserable. We have some debts to be repaid.
A woman of acquaintance introduced me to Mr. and Mrs. Rao. Both of them are software professionals. They hail from our village and are working in Bengaluru. They were married two years back. Recently Mrs. Rao gave birth to a male child. As they couldn’t afford to foster him in time, I was asked to take care of the child and work as a domestic helper.
They cleared our debts in advance and deduct them from my wage. I go to my place for some festivals.

Question 8.
If you live in a rural area, interview a person who has come on a vacation from working in a town in the unorganized sector, write his story (see the case study of Ramaiah).
Answer:
Suresh – a salesman in a readymade shop.
I was a resident of Pedakonduru village of Duggirala Mandal in Guntur District. I studied up to 5th class in Pedakonduru elementary school and later up to 10th class in Pedapalem, a 2 km journey upwards. Later I could not continue my studies.
Later I went to Vijayawada, a 17 km distant city in nearby district Krishna. I joined ‘Step-n- Style’ a readymade garment shop at Patamata in Vijayawada. Except salary they do not provide me with any other facility. It is the work under unorganized sector. Our shop works 7 days a week. Each one is allowed to take a weekly off on a different day of the week.
I have been working there for the last 17 years. I had pleasure working there for that much time. At times, we aren’t even given off on festival days. Most of the customers are of friendly nature and we don’t usually have any tensions.

Question 10.
Why are contacts and networks essential for getting jobs in urban areas?
Answer:

Question 11.
Calculate the total number of persons added to urban population for each period and percentage of each group. Write sentences for each bullet point.

Question 12.
Observe the graph given on page 107 in Textbook and answer the following questions.

a) How would you construct a table to show the effect of migration for the entire period 1961 – 2011?
Answer:

b) When people move out of rural areas which sector of the economy in the rural area loses the most number of people? Why?
Answer:

c) In urban areas, what are the common sector(s) of the economy in which migrants from the rural areas find employment? What are the reasons for this?
Answer:

Question 13.
Why is there a shortage of sugarcane cutters in western Maharashtra ?
Answer:

Question 15.
Why are sugarcane cutters employed only for six months? What work might they do during the other six months of the year?
Answer:

Question 16.
How could the living conditions of these workers be improved?
Answer:

Question 17.
The seven districts in western Maharashtra- Nasik, Ahmadnagar, Pune, Satara, Sangli, Kolhapur and Sholapur – comprise the “sugar belt” which extends into Surat (Gujarat) in the north and Belgaum (Karnataka) in the south. Five districts of the arid Marathwada region – Beed, Jalgaon, Ahmadnagar, Nasik and Jalna – send out labour to this sugar belt for six months every year for sugarcane harvesting.
Draw arrow lines on a map showing districts of origin and destination of migrants.
Answer: 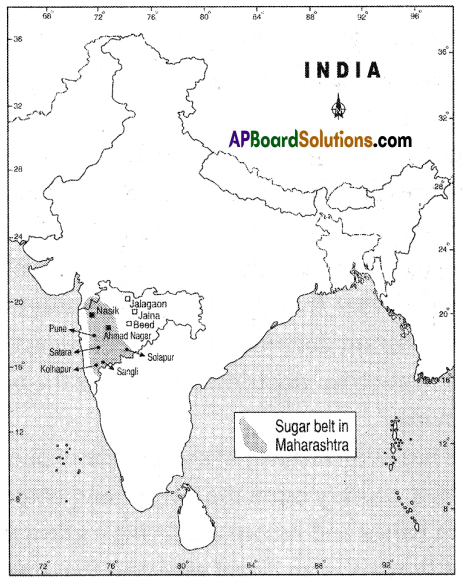 Question 18.
Describe an example of seasonal migration of your region.
Answer:

Question 19.
What can be done so that migrants are able to get food, health and family care programmes?
Answer:

Question 20.
There are some initiatives taken by government and voluntary agencies. Find out if there is any such initiative in your area. Invite some persons from such agencies for a talk in the school.
Answer:
Self Activity.

Question 21.
National boundaries are protected against migrants. Here are examples of
a) USA on Mexican border
b) South Korea on North Korean border
c) India on Bangladesh border. 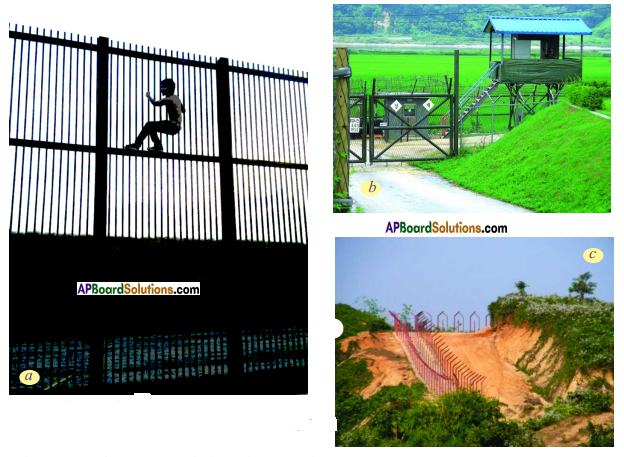 What do you think of migrants across the border?
Answer:
In the above figures the national boundaries of Mexico – the USA, South Korea – North Korea and India – Bangladesh are shown. It is common to arrange a fence between two countries along the border. The soldiers belonging to both the countries always safeguard the borders. But, due to many reasons different people try to cross the borders and enter the neighbouring countries. Some among them are terrorists who resort to violence and destruction in their enemy countries. They are induced and inspired by respective countries. They are called state sponsored terrorists.

In terms of employment and infrastructure, America is more attractive than Mexico. That is the reason why some people enter that country in illegal ways. Both South Korean and North Korean governments have different doctrines. One is communist whereas the other is capitalist. Those who differ with other countries’ doctrines try to cross the borders and go from one country to other for the sake of spying.

In Bangladesh, the rule has been dictatorial and the life of people there has been pathetic for ages. So some people of that country cross the border and enter the democratic country India. The states such as Paschim Banga and Assam are facing a grave problem with these people.

It’s a crime to cross the borders in an illegal way. And these people become a problem to the country they enter.

Question 22.
Draw arrow lines on a World Map depicting people from India going to different countries mentioned in the above passages. 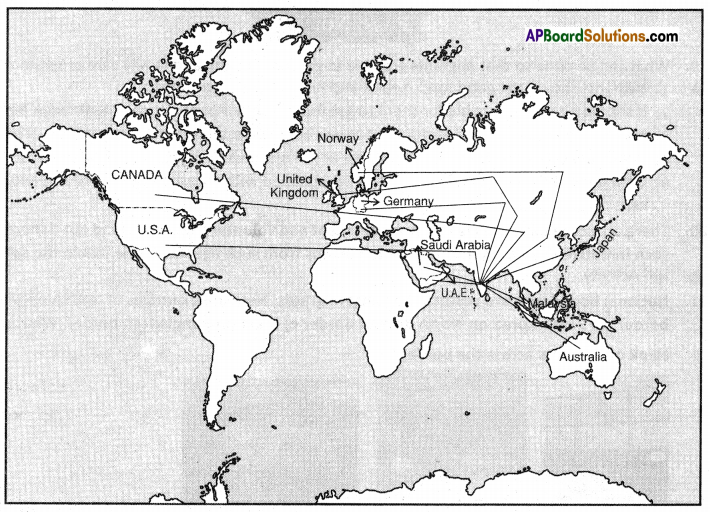