→ The evolution of democracy has had many ups and downs.

→ The meaning of democracy broadened and it developed many new layers and shades.

→ Democracy means a system in which those in government get their authority from the people and have to answer the people.

→ The elected government functionaries are answerable to the people in different ways.

→ Democracy is based on equality and inclusiveness.

→ People can participate in decision-making only if people are free to know, to discuss, to form independent opinions and express them and form associations to press for their views.

→ In a democracy, it is very important that are free and fair elections.

→ A democratic government rules within limits set by constitutional law and citizen’s rights.

→ Most societies across the world were historically male-dominated societies.

→ Expectations from democracy also function as the criteria for judging any democratic country.

→ Public discussions: Free and open discussion of some question of public interest.

→ Civil liberties: One’s freedom to exercise one’s rights as guaranteed under the laws of the country.

→ Social and economic equality: Social equality is a social state of affairs in which all people are within a specific society. Economic equalitarianism is a state of economic affair in which equality of outcome has been manufactured for all the participants of a society.

→ Internal conflicts: A struggle within the character or within a group. 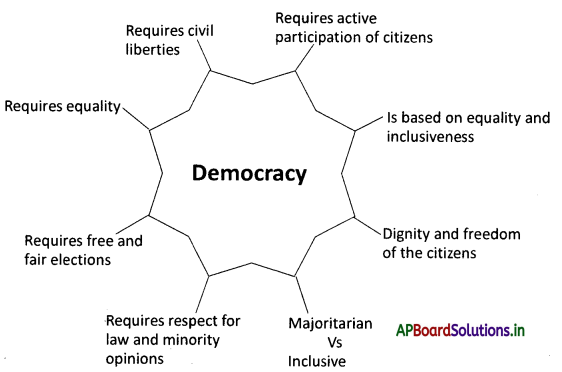